Tymon Kolasiński is a well-known and respected cuber from Poland, and he recently broke the 3x3 Average World Record with a series of amazing solves. 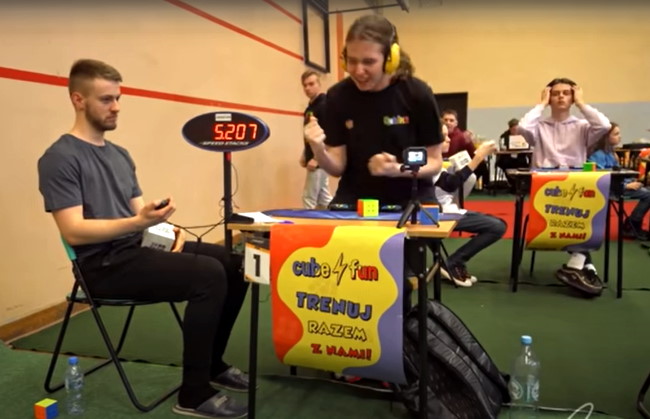 The record was previously held by Max Park, of the US, and was beaten by an astounding 0.23 seconds. For comparison, the previous gap was 0.16 seconds between Max Park and Ruihang Xu.

Below is listed the top 10 record holders of this event.

At the moment the fastest single solve record is held by Yusheng Du with 3.47 seconds.

Throughout all 5 solves, Tymon uses wide moves to avoid rotations that would have interrupted the flow of the solve. He also does one xxcross, two xcrosses and two normal crosses. Interestingly, his worst solve was one of the xcross ones, where you would expect it to be a normal cross one.

This was an astounding average and I hope to see a sub-5 average very soon!

This was his first and fastest solve, being 50 moves long and having him turning at 10.57 TPS (turns per second).

According to the WCA regulations, the best and worst times are dropped from the five solves and the average of the remaining 3 times gives the final result.

The yellow cross on this solve is much more obvious, and Tymon does a y’ rotation for inspection. There is a yellow pair already made in the front right after the rotation, which he does preserve with his cross solution U' F2 R2 u' R u'. He can then insert the pair with a simple R' U R and then rotates to solve the second pair y' R' U R into the remaining back slot. He then rotates again to solve the third pair with y' R' U' R U R' U2' R. For the fourth pair, he decides not to rotate and instead solves it with F moves mostly, doing U F' U' F U R U' R'. He now decides to do a 2GLL, which is a last layer solution that does OLL and PLL all with only R and U moves. This is very good, as R and U moves can be done very fast with minimal or no regrips (where you temporarily let go of the cube to change your hand’s position on it). The 2GLL he does is U2’ R U R' U R U2' R' U' R U R' U R U2' R' U2'.

His third solve was his worst solve that counted towards the average. He did 49 moves at 9.35 TPS.

This is another scramble where the yellow cross is easily visible, and there are 2 pre-made pairs.

He does no rotations for inspection and makes an xcross with one of the pairs, but he has to break the other R' u' F2 R L2 U2 L'. He rotates to solve the second pair, and solves it with y' U' R U2’ R2' U' R. Tymon also makes the third pair in this sequence. The third pair is simply inserted with y U2 L' U L, leaving the back right pair as the last remaining one. This is not normally what you would want, but Tymon handles it well, doing a wide d move to avoid a full rotation d' R U R' U R U' R'. He is not greeted by a good OLL, but he solves it well, r2' D' r U r' D r2 U' r' U' r, leading to many top solvers’ favourite PLL, an A perm. x R' U R' D2 R U' R' D2 R2 is the PLL algorithm he uses, ending solve 3 of the average. The algorithm is not the normal A perm algorithm, in which you hold the last layer facing you, but the opposite, where the last layer is facing away. I don’t know if this is his normal algorithm, but it seems unlikely, which means that he saw the annoying rotation and decided to try a reverse A perm in an average that could, already at this point, be a world record. That is impressive.

Solve 4 was his worst overall solve, at a 6.57. Being the worst of 5, this solve was not counted towards the final average. It was 52 moves, which he executed at 7.91 TPS.

Tymon’s fifth and last solve was solid to end it off. Nothing insane, but still impressive. He did 49 moves at 9.42 TPS.

Read the comments on the Speedsolving forum: https://www.speedsolving.com/threads/tymon-kolasinski-5-09-3x3-average.85949/