In this tutorial, I will teach you the Mehta method. This method was made for 3x3 by Devagio (Yash Mehta), but has been adapted to big cubes by Matthew Hinton with the Mehta-MH method, and it also works on Square-1, but the details for that are still being worked out.

There are multiple versions of Mehta. The main group is Mehta-OS, OS standing for Option Select, and the advanced section is Mehta-TDR, named so after the first varying step, TDR, in that path.

This tutorial will use the Mehta 6CO, 6CP, L5EP path, which is the recommended path for a solver that is not highly advanced. It is also the base for Mehta-OS and is most likely the only path to have fully genned beginners' algorithms.

What are the advantages of Mehta over Roux, CFOP, Petrus and ZZ?

The idea behind Mehta was to have more algorithmic steps, with a reasonable number of algorithms, 200 maximum. The movecount averages 40-50 moves. This method ‘combines the movecount of Roux with the algorithms of CFOP'. This makes the Mehta method a formidable method, and one that I believe all top solvers will use once it gains enough popularity.

The three best paths for a Mehta solver are 6CO, 6CP, L5EP, as mentioned above, DCAL, CDRLL, L5EP, which is still a reasonable algorithm count, and TDR, ZBLL, which has a ridiculously high algorithm count, almost 900.

What are the first steps?

The first steps of the Mehta method are 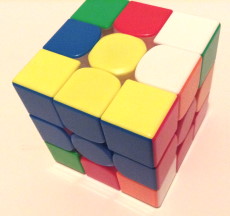 The First Block step is like the Roux Method first block, except that the block is made on the D face rather than the L or R face as in Roux. The block can be made anywhere on the D face, but it should then be moved to the bottom left row and the bottom middle row. The 3QB step is RUu gen, with very infrequent E moves, and once done, the empty belt edge should be in RF with the belt misaligned, as will be shown in the pictures. The EOLE step involves solving the last belt edge, as well as orienting all the edges. After these steps, then it is the algorithmic ending.

This step involves making a 1x2x3 block on the D face. This block should be in DL, as shown in this picture. Try to make a block on a variety of colours, as this will give you many more options in your Mehta solves, and more options are always good.

This step is RUuE gen, which means that it only uses those moves. First, align the centres by doing a u or u2 or u'. Then, do one more u so that the centres are misaligned and solve the back left, back right and front left edge slots. These E slice edges are called the belt. 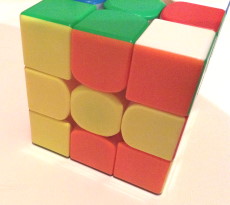 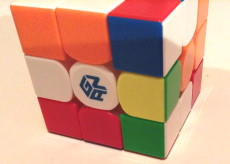 The u move off is called a pseudo-block and it is necessary to ensure that the 6CO and 6CP algorithms work. It is possible to do a u' move off, as that would still be a pseudo-block, but then the front right belt edge would still need to be unsolved, and then for the 6CP algorithms you would need to do the D moves in the opposite direction and it would just be more hassle than is necessary. 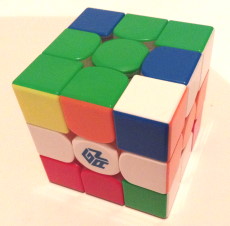 In this step, you insert the last belt edge and orient all the edges. For a beginner, this tends to be done by making sure that the bottom right edge is oriented, then using R U R', R U' R', F' U F, or F' U' F to cycle what edges are in the front right slot, then once the edges are oriented, inserting the edge that should be in front right. 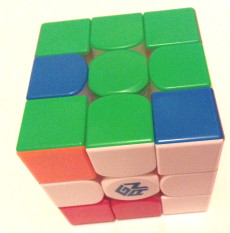 In this step, you orient all the remaining pieces on the cube: the corners that are not part of the first block that you made in the first step. This is where the 6 in 6CO and 6CP comes from, as there are 8 corners on the cube, and 2 have been solved already. For a beginner, there are 7 algorithms, a few of which will be familiar to you if you have used the beginner's method or CFOP.

This step is done in two parts which are putting two oriented corners into the D layer and then orienting the rest. Some of these algorithms affect the DR edge, so do not try to use them in CFOP solves. If there are less than two oriented corners on the cube, you need to do a Sune algorithm (shown below) to orient another corner to put in the bottom bar using R2 U/U2/U' R2 triggers. After doing this, you need to use the algorithm that matches the case that you have. The 7 cases are the same as CFOP 2 look OLL.

H: hold with headlights facing you and one pointing away from you and do

Pi: hold the same as CFOP, with the headlights facing left and the opposite set facing towards and away from you and do the same algorithm as CFOP:

U: Hold with headlights on the right and the oriented ones on the left, then the algorithm is

L: Hold oriented corners in front right and back left and do R D' R U' R' D R' 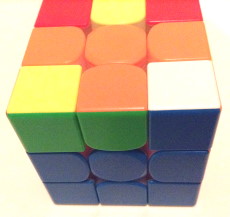 For this there are 8 cases including solved, and 7 algorithms. 2 of these you should know from 4LLL if you used to use CFOP, otherwise they will be new.

but the D' can be done at the start too if your grip happens to be like that.

As above, the D' can be done at the start too. A J perm does not have to be used, any adjacent swap PLL can be substituted, but J perm is the most commonly known. 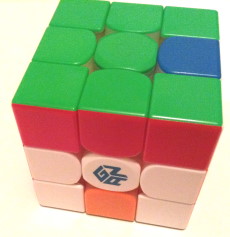 The final L5EP step of the Metha Method stands for Last 5 Edge Permutation, as they are already oriented. After doing the 6CP alg, you should have the last unsolved edge in the D layer in the DF slot, and the edge itself in the U layer, OR the edge will be presolved, in which case you just need to do a single EPLL and the cube is solved. Those algorithms are below.

If the edge is unsolved, it should be immediately obvious to you which one in the top layer it is, as it will be the only edge with a colour on top not matching the surrounding ones. Once you have found this edge, bring to UF and do M' U2 M to insert it. You will then be left with a solved cube or one of four cases. These cases are a Ua perm, a Ub perm, a H perm, and a Z perm. You might know some of these, but I will put the algorithms in here anyway. 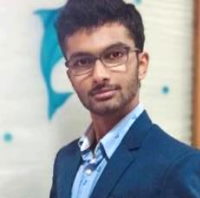