The GAN 356XS, although being an GANCube Flagship model, is still one of the best cubes, with customizable centre-caps to fit that of the GAN Robot. The cube was released in Late 2019, where GANCube seem to be most active with their flagship models such being in Q3 and Q4 – where they also appeared to have released their GAN 11 M Pro. In terms of the hardware improvement they included, they appeared to have produced the most effective and efficient way of changing magnet strengths, with their “switches” they included instead of the previous “capsules” in the GAN 356X, which also was very interesting at the time. Speaking of at the time, it appeared no competition struck the GAN 356XS when it was released, however, this isn’t why it is one of the best cubes, why it is? That we will of course see in later on. 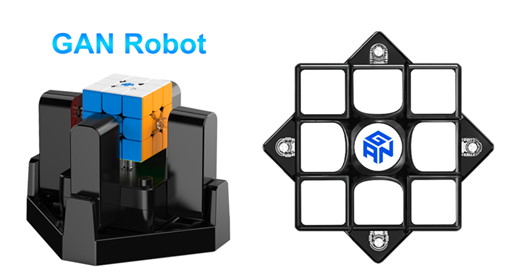 As well as this, the cube overall has extreme customizability, a lot of accessories, as well as smooth turning and controllability that comes along with it. Whether it is the BEST cube or not… We will see.

Out of the Box Feel

Out of the box, the cube performs extremely well, even for a flagship, the cube is very smooth, the factory lubrication appearing as though it was done very well, with the cube being a controllable speed. The box that the cube came in also looking very appealing, with the blue GAN logo popping out of the simplistic box design, inside the box came the very 1st (and only) corner-hinged GAN Box, which for some reason never appeared further than this model. The accessories box contains the GAN Robot-fit centre-caps; the traditional GAN Bag; the elasticity and tensioning tool; as well as the GAN Pamphlet as well.

The cube out of the box (as I said earlier) was unexpectedly really good, with the cube providing good stability with the strong magnets in place, as well as the customizability shining within the hardware perspective of this cube.

The cube features the main versions when it comes to a 3x3, the Stickered Version and the Stickerless Version both of which consist of Primary Internals. Unfortunately, not as many customizable options compared to that of the GAN 11 M Pro.

The GAN 356 XS brought a great improvement to the cubing market, with the cube having one of the most efficient and effective magnet strength changing system with their “switches” instead of their capsules they previously has in place, which was very hard to remove and replace. However, with this improvement came ease of customizability leading to a great improvement in speed and reduced the number of accessories needed for it you would like to change your magnet strengths on the move.

Before this improvement, with the GAN 356X, you would have to carry a capsule container with you wherever you would like to customize, so it was great to see that they increased portability with this hardware improvement.

Corner Cutting was very good out of the box, even with expectations high, the cube performed really well when it came to corner cutting, with it cutting 45 degrees+ forward, and Line to Line reverse.

With lubrication came a further small improvement in corner cutting as well so that was great to see that their honeycomb design is loosening their cubes and speeding them up.

Why is it one of the BEST cubes? (Overall Thoughts)

The GAN 356XS is classed as one of the best cubes overall. I think this due to the speed it had out of the box, the customizability and hardware upgrades that it brought to the cubing community, as well as the cube being overall a great cube, not only for that time, but even now, the cube succeeds in still being a lovable cube.

The cube for £49.99 may not be the greatest price for many, however, the cube performs above its price-point with the cube having a range of customizable options in order to fit your needs, with

all being easily changeable comparing to other cubes’ settings, that may not be the best. However, it’s not only the cube accessories and hardware that make this cube one of the BEST. The cube is great and controllable out of the box, with the cube consisting of a honeycomb design that has a great effect on the cube.

Once lubricated, this cube was even better, as it performed some of the greater cuts that certain cubes couldn’t complete, as well as this, the cube also could perform certain algorithms really quickly, with surprise as to how quickly some people have developed in 3x3 due to this very cube. However, the cube slowly began to turn slow due to the lack of activity with this cube, and so took some “reviving” to re-vamp this cubes ability.

Overall, the cube is really great and most certainly recommendable.

Is this the best spedcube?

All of these cubes are certainly recommendable, with every aspect of each cube being more surprising than the last, however, there would be a certain cube that “pops” out for me and possibly others as well, and that would be the MoYu WR M 2020 3x3.

Although the GAN 11 M Pro is a really great cube, the price may not be as expected, with it surpassing the $60.00 mark, it wouldn’t appeal to the majority of those looking for a “better-value-for-money” flagship model that they could main. Hence the reason I would recommend the WR M 2020 over all of the others mentioned.

I think this as the WR M 2020, costing $34, is a really good cube with great controllability. The cube consists of 2 versions both of which would be appealing to many, as well as a “killer” accessories box that would rank #1 of all considering the effort put into the design and how well they organised this accessories box in comparison to the “messy” boxes that other cubes provide. The cube out of the box was really good, with it being nice and controllable, smooth, and easy to manoeuvre and perform algorithms that it, if you have smaller hands. Although this cube is the best for it’s price, it comes with a consequence, whether that consequence be more vivid for other. The cube measures 55mm instead of the standard of 56mm that many would be used to. However, this certainly doesn’t hinder performance for those who would accept the size of this cube as it speeds through algorithms and performs incredibly well.

This is why some people would prefer the WR M 2020, however, make sure to read on to see why the GAN 11 M Pro or the GAN 356XS could still be the best for you.