The MoYu WeiLong WR M 2020, is the 2020 version of the original WR M cube which was released in 2019 after following the GTS3 that MoYu had also manufactured. The WeiLong WR M 2020 is also having an updated design following from the WR M which previously followed the GTS series, with similar traits coming from them as well. This cube, however, features a speed, controllability, less of customizability, but one of the best accessory boxes that we will talk about within the unboxing experience. Whether this cube is this cube is the best or not, we will have to see, although the cube was made by MoYu and their flagships are usually very premium.

Out of the Box Feel

Out of the box, the WR M box was very appealing to open and to “explore” as the contents was something to admire, the box having very organised accessories and a very luxurious mini box that held the very cube itself. In detail on the accessories, the cube consisted of a traditional MoYu Screwdriver, some spare screws, enough to replace all six sides, as well as spare magnets that you wouldn’t often see from certain cubes such as GANCube not needing the use of spare magnets within their cube boxes. However, this inclusion certainly does make a difference for if ever in need of strengthening the magnets in the WR M 2020, or any other cube that would prefer some strengthening.

The actual cube out of the box was very quick, but still had a “clacky” but controllable speed to it. The tensions were perfect and even, although perhaps could’ve done with a bit of loosening in order to complete some of the really difficult cuts. Unfortunately, the due to the 55mm size of the cube, (which in comparison to the average, is 1mm smaller) I wasn’t able to complete some algorithms that most certainly would be necessary in a regular solve, however, this may be different to others, and is completely reliable upon the size of your hands, smaller hands would prefer this cube, whilst larger hands wouldn’t and would rather go for the “norm” size of 56mm. Overall, out of the box, the cube is very impressive, with speed being quick and better than normal, how it would perform over time? We will see.

In comparison to the GAN 11 M Pro, the cube doesn’t have many customizable versions, however, the 2 main versions they have in stock would be the Stickerless Version and the Stickered Version although the stickered version may not be appealing to many, considering the drop in demand of stickered cubes. The stickered version still being very good quality, no sticker peel situations have occurred yet.

Why is it one of the BEST cubes? (Overall Thoughts)

The cube is really good for it’s price. The cube consisting of organized accessories of spare magnets; spare screws and even a spare core in a large accessories box that is easy to track. Whilst this appeals to a lot of cubers, the box design is also something to admire greatly, with an improvement on the original WR M “gold” design to the WR M 2020 aqua blue design that arguably looks a lot better. But it’s not only the mere designs that are the best points of this cube. 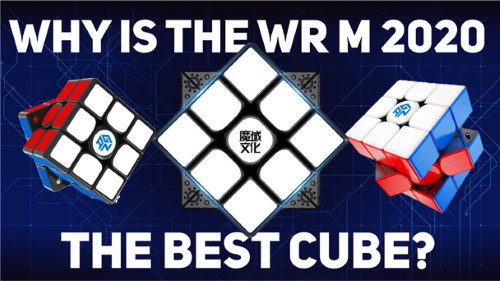 Is this the best speedcube?

The WR M 2020 features a smooth, fast, and controllable feel to it, whilst still retaining the light and airy feel out of the box. And the cube when lubricated is even better, DNM-37 to speed it up adds a touch of speed whilst lubricating it to a point where the slight scratchy feel that remained out of the box, no longer exists as the cube feels as though it has almost no friction when turning.

However, the only flaws I would point out is that the cube has a slight clacky feel to it considering the piece design, and how it isn’t as premium as those from the GAN 11 M Pro, or the GAN 356XS, although these cubes are of course of higher value and price, in which case this flaw can be overlooked. As well as this, the size isn’t the best, with the cube feeling small and algorithms being somewhat inexecutable at best, however, it of course could appeal to those whose hands are of a smaller size, and perhaps as a one-handed main as well.