How to win a million with the Rubik's Cube

A psychology student from Münster, won the German "Who wants to be a millionaire" quiz show on 7 December 2015 with a Rubik's Cube related question. 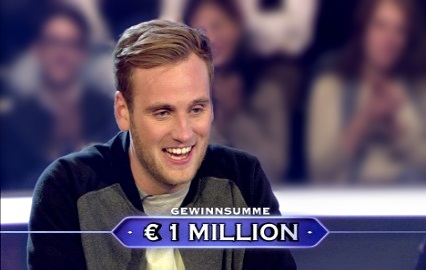 The puzzling question in the final round brought Leon Windscheid €1 million one day before his 27th birthday, making him the 11th competitor reaching the main prize in the 15 years long history of the show.

Windscheid asked for the help of the host of the show, Günther Jauch because he had used all other options until he reached the 15th question.

Windscheid jumped out of his chair when the answer he marked correct showed up green on his screen and confetti rained down.

After the show he declared that he was so certain about the answer that he had to take the chance. He said that the money is not going to change him but it will give him freedom. He's planning to spend the money to fund his doctoral studies, buy a renovated party boat and to travel.

Take the Rubik's Cube Quiz to find out how much you know about this puzzle!