The Megaminx is a dodecahedron-shaped puzzle, it has 12 pentagon faces. You can generate a random scramble for the Megaminx with this program. This scrambler displays a permutation and the unfolded Megaminx showing how the puzzle will look after you have performed the rotations to a solved puzzle.
Start the Megaminx Scrambler 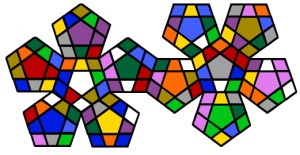 Scrambles: Set how many scrambles you want to generate.

Length: Set the length of one scramble. To see how the unscrambled puzzle looks, set this number to 0.

Separate: Too long scrambles may be easier to read if there's a break after every five moves. Activating this checkbox the program will insert separators into the algorithm for better readability.

FRU only: is inactive for this puzzle..

Notation of the Megaminx

The Megaminx notation used by this scrambler was introduced by Stefan Pochmann and has been adopted by the WCA. I could have marked all the 12 faces with different letters and mark the rotations this way but the notation I will present here is much easier and faster to use. With only three different letters we can move every piece, including the centerpieces.