The Rubik's Clock is a two-sided mechanical puzzle which is present on the official WCA competitions. The scrambler generates a list of permutations and displays the scrambled Rubik's Clock after these operations have been applied. 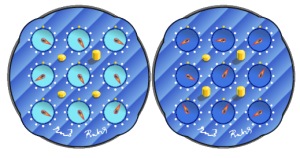 You can use the following settings:
Scrambles: Set how many scrambles you want to generate. This number may vary from 1 to 99 and it must be a valid integer.

Length: Set the length of one scramble. This must be a number between 0 and 999.

Separate: Activating this checkbox the program will insert separators after every 5 moves into the algorithm for better readability.

The Orient and FRU only settings are inactive for the Rubik's Clock.

The Notation of the Rubik's Clock

When you generate a scramble for the Rubik's Clock you can see a list of images showing the positions of the four yellow buttons and which gear you have to rotate in which direction. The number shows how many "hours" to turn. Counterclockwise rotations are marked by negative number. Do these steps so you hold the puzzle in your hand with the light blue clocks on top.
On a bigger image you can see how the puzzle will look when the Rubik's Clock is scrambled.

Below the graphical rotations you'll find the same rotations with letters.
(dddU, 1, 3) - the positions of the buttons: d = down, U = up. The first number indicates which corner to rotate (1-4) and the last number shows how many hours to turn.