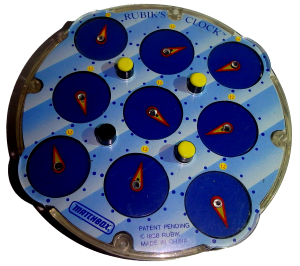 The Rubik’s Clock is a puzzle invented and patented in the 1980’s. The patent was purchased by Ernő Rubik and marketed in 1988. It is arguably one of the simplest puzzles that is currently speedsolved in official WCA competitions and there has been quite a lot of discussion surrounding its future as an official event due to being completely different from all other twisty puzzle events currently hosted. 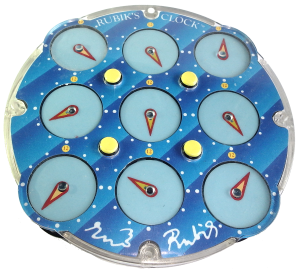 As mentioned above, the puzzle has a design that makes it completely unique when compared to other official WCA events. It features 9 clock faces on each side in a 3x3 grid, and four pins that can be pushed in or pushed out (this is reversed on the other side). There are also four corner gears, which control the movement of the clocks, which are also gears. The solved state of the puzzle is when all clocks on both side face 12 o’ clock (marked above each clock face).

The position of the pins determines which clocks are moved with which gears. Every clock surrounding a pin that is pushed up will be moved when you move the gear nearest to the pin. Therefore, if the upper-right pin was the only one pushed out, then moving the upper-right gear would rotate the four clocks surrounding the pin together. If the two upper pins were both pushed up and the two bottom pins were pushed down, then moving either or the top two gears would rotate every clock on the first two layers in the same direction.

The above is an example of an official clock scramble that would be used in a competition.

The first step is to hold the solved clock with all clocks facing up (it doesn’t matter which side you start on). Next, you look at the first scramble move, UL3-. This means that you push every pin down and push up only the upper-left pin. Then you use the + (clockwise) or – (anticlockwise) symbol to determine which direction you move the gear in. You must move the gear nearest to the pin that is pushed out (if there is more than one pin facing out, you need to use either of the gears nearest to those pins). In this case, you move the upper-left gear 3 “hours” anticlockwise.

The next move is U4-. If there is only one letter, then you push up both pins on that side of the puzzle, leaving the other two on the opposite end down. Therefore, with U this means that the two upper pins should be pushed out and the two bottom pins should not. And, same as above, the number and symbol indicate the number of “hours” and in which direction you should move the gear.

A little further into the scramble you will see ALL3+ and then y2. These should be fairly explanatory, for ALL you simply push all pins up and use any clock to move 3 “hours” clockwise. The y2 then simply means rotate the puzzle so that you’re now looking at the back and the 12 o’ clock indicators are still pointing upwards.

The final moves of the scramble notation will not include numbers of symbols. When you see just two letters on their own at the end of a scramble, it simply means that you push that pin out. So with this scramble, when you’re done you should have the upper-right and lower-left pins pushed out and the other two pins pushed down.

The steps to solve the puzzle and a further explanation on the information provided in this article are simply described in this short video.

To conclude, the Rubik’s Clock is a fairly simple puzzle, and it is a good start for somebody who wants to move off of NxN puzzles or simply does not have the patience to learn the original cube.