There are two common color alignments of the Rubik's Cube, the Japanese and the Western color schemes. They both use the same six colors: white, yellow, orange, red, green and blue and there's only a slight difference between them. Cubes with white plastic body usually have black stickers instead of white.

Let's begin with the Japanese color sheme which was used on the earliest mass-produced cubes and is still used today by a small number of speedcubers. They prefer to start the Fridrich method with the blue cross to finish with the white last layer.

The Western color sheme (also known as BOY: blue-orange-yellow) is the most used color arrangement used not only on Rubik's Cubes but on the majority of cube-shaped twisty puzzles these days.
Cubers who use this color scheme usually start solving the Rubik's Cube with the white face and finish with the yellow.
This color scheme is also called Minus Yellow because if you add or extract yellow from any side you get its opposite.

The WCA regulations don't specify what color scheme must the competitors use on official cubing events. Rule number 3a3 specifies that polyhedral puzzles must use a color scheme with one unique color per face in the solved state.

In 2014 the inventor of the Rubik's Cube, Rubik Ernõ was asked why did he choose these six colors to mark the faces of the puzzle he answered:

"If the cube wouldn't be colored there would be no objective, there would be nothing to solve. Using the colors we can specify the target we have to reach. I was looking for the most simple way to mark the solved state. I chose these six colors (actually 5 real colors because we don't really call white a color) because they are all basic colors and there's no need to explain them. Everybody knows what red, blue, yellow, green, orange and white are."
(Rubik Ernõ) 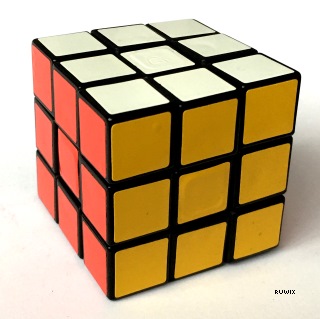 The yellow and white sides next to each other: an unusual color scheme