A three dimensional twisty puzzle is usually made of a set of pieces that can change their position through a group of operations, obtaining different combinations. Physically, the rearrangement of positions is done through the rotation (twist) of some pieces around a point of the polyhedron (which may represent one of the pieces of the puzzle), which is usually located at the center of a face or a corner.

Often the puzzle pieces have one or more colors and the solved state is represented by the position in which each face of the polyhedron contains pieces of a single color.

These puzzles are all the descendants of the Rubik's Cube, invented in 1974 and there are countless variations of them.

In this section you can find a collection of solutions, descriptions, opinions, videos and more about the most popular twisty puzzles. It gives you a clue if you want to buy a puzzle or it helps you find their solution.

If you want to start collecting collect these toys you might find interesting the "Rubik's Cube Collection" page. 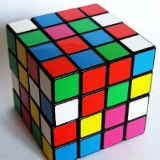 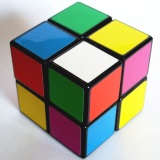 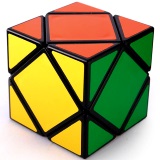 The Skewb was invented by Tony Durham in the early 1980s. It was released originally by Uwe Meffert as the “Pyraminx Cube”, but the name “Skewb”, coined by Douglas Hofstadter in his column about the famous puzzle back in 1982. The original name was suggested after the cube’s properties – It acts like a Pyraminx with 4 axes of rotation, but in the shape of a cube. The Skewb’s initial popularity was impressive, and several modifications were designed and released after the original cube’s entry into the market.

The puzzle garnered the attention of speedsolvers and the WCA, who saw the puzzle as something that would be amazing to speedsolve in official competitions. After the Magic and Master Magic puzzles were removed at the beginning of 2013, it was arguable that there was a gap in official WCA events, something that Skewb could fill perfectly. So, as of January 1st 2014, the Skewb has been an official event in the WCA, and many popular speedcubing companies have worked to produce some amazing speedcube-able variants of the popular puzzle. 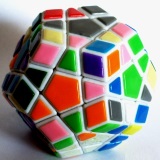 The Megaminx was invented by Christoph Bandelow in the early 1980s. It was release originally by Uwe Meffert in 1982 and named it the “Pyraminx Magic Dodecahedron”. This puzzle is notable due to its relative simplicity despite its apparent difficulty and impressive size. The Megaminx is not much more difficult than a 3x3 in solution terms; in fact, with knowledge of a simply 3x3 layer-by-layer beginner’s method and a bit of intuition, anyone can solve the Megaminx. The last layer has similar OLL and PLL algorithms to a 3x3 cube too. The Megaminx is an official WCA event, which means that at official competitions solvers can race each other to obtain the fastest times, which are electronically stored on the WCA website (including the stats for every other event). 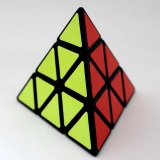 The Pyraminx is a well-known and highly regarded puzzle, due to both its simplistic design and core mechanism for the time it was invented. The puzzle was actually invented by Uwe Meffert in 1970, but was only officially released by Meffert once the Rubik’s Cube craze began in the early 1980s (Meffert even stated that without Rubik’s invention, he would never have produced the Pyraminx). The Pyraminx is one of the oldest twisty puzzles in all of recent history, and can be solved using a basic layer-by-layer method just like most popular twisty puzzles. The Pyraminx is an official WCA event, which means that at official competitions solvers can race each other to obtain the fastest times, which are electronically stored on the WCA website (including the stats for every other event).

The Square-1 (originally called “Back to Square One” and “Cube 21”) is a completely different puzzle to any normal Rubik’s Cube themed puzzle. The original name “Cube 21” was coined as the Square-1 was deemed to be a “cube for the 21st century”, implying an unprecedented level of difficulty. The puzzle can technically “shape-shift”, although it always remains as a 3 layered puzzles (the only difference the “shape-shifting” makes is it mixes the corners and edges on the top and the bottom layers of the puzzle). In fact, the first stage of a conventional Square-1 solving method is “cube-shape”, in which the corners and edges of the top layer must be separated back into their original configuration – a cube. The Square-1 is also an official WCA event. 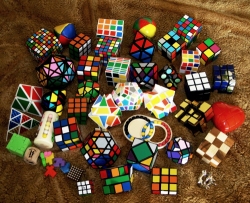