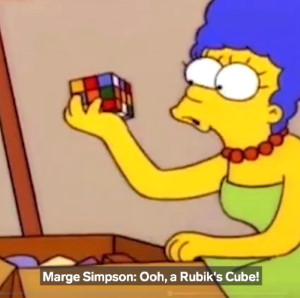 Simpsons Did It as well

The Rubik’s Cube in Movies

The Rubik’s Cube, as a theatrical device, is an incredibly useful and frequently-seen object not only in music videos and commercials but in movies as well. It can be used in different ways to represent different things, or just as a background object to help the audience subconsciously relate to the character portrayed by thinking “I had one of those”. It is also very useful to clearly portray intelligence, thanks to the general public’s belief that only the most intelligent people are able to solve it. The cube has most likely appeared in too many pieces of media as a background image to count, so here we will take a look at some of the more in-depth uses which portray the cube as more than just an object. 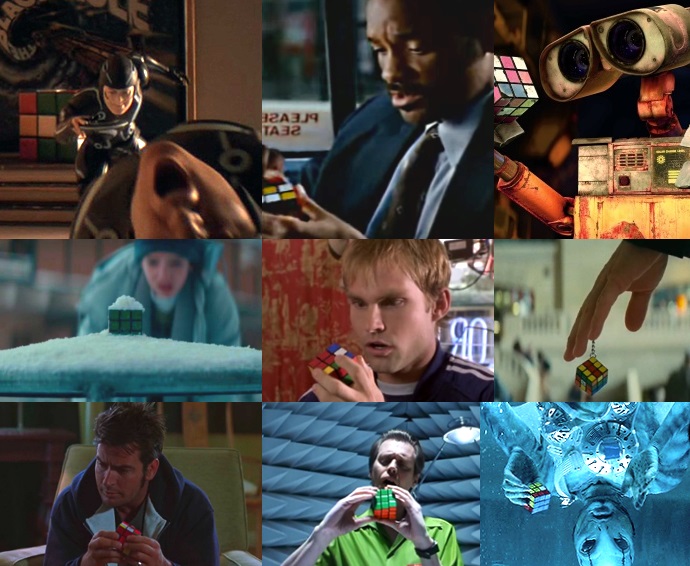 In this funny, action-packed and beautifully animated Marvel adventure the young Miles Morales becomes a new Spider-Man and ends up meeting other Spider-creatures from parallel universes. One of them is Spider-Man Noir (voice by Nicolas Cage) who's obsessed with the Rubik's Cube. He can be spotted frequently playing with the cube (at 1:10, 1:34 and 1:44).

This is how he says goodbye before jumping in a transdimensional portal to return home to his own parallel universe:

At the end of the movie we can see him finishing the puzzle at home in his all black universe where the Rubik's Cube is the only colored object.

We can see a Rubik's Cube in the third episode of the successful series, in which the Minions and Gru battle the 80’s-obsessed villain Balthazar Bratt (voiced by South Park co-creator Trey Parker). Balthazar used the cube as a smoke bomb in the opening scene of the movie. 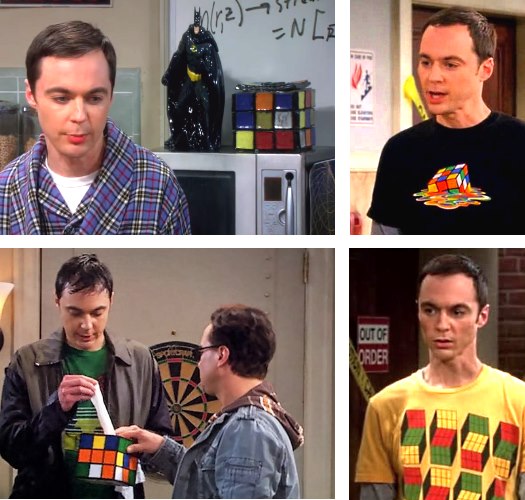 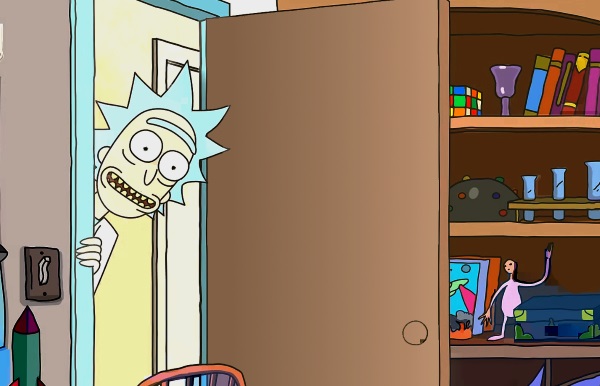 A scrambled cube can be seen on the shelf in this animated science-fiction series. The cube is just a background object but it can be seen every time when Morty's bedroom is shown. 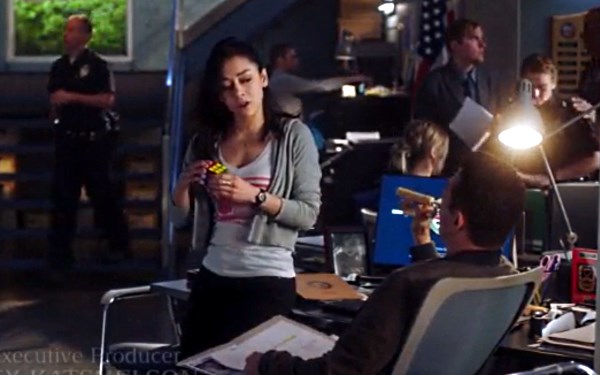 Ella complaining to detective Dan Espinoza about how hard it was to clean a boiled corpse before autopsy while finishing a Rubik's Cube. 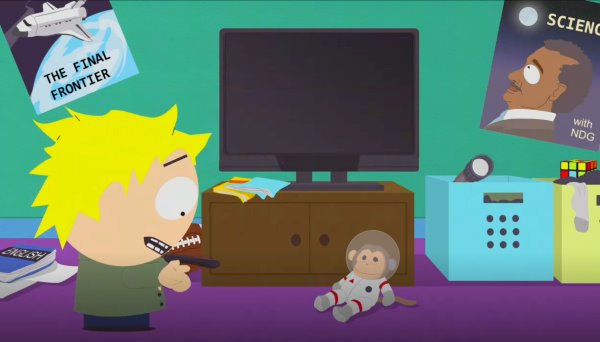 Season 21 episod 2, Put It Down: The cube can bee seen in Craig's room when Tweek wakes him up in the middle of the night because he's afraid of a North Korean attack on his house. The Rubik's Cube is tossed in a laundry basket and it's just a background object. 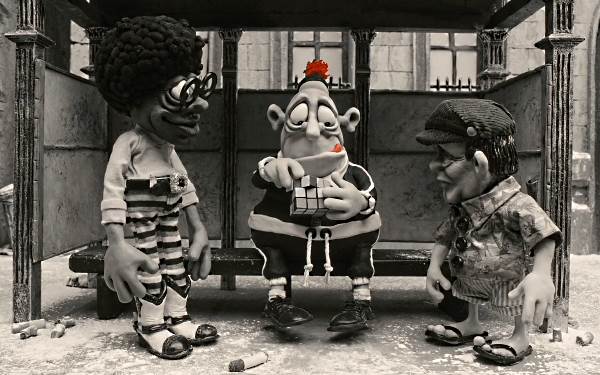 Max liked to solve problems. In this scene he's solving a Rubik's Cube in a bus stop. He kept his cube in his nightstand's drawer, next to the booklet which helped him to understand expressions on peoples faces. 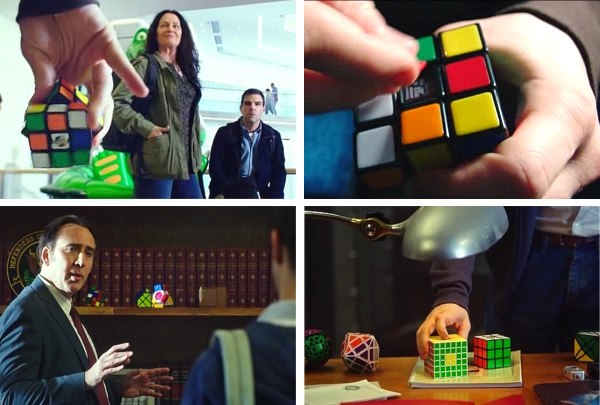 We can spot the Cube many times in this biography drama which tells the story of a CIA agent who leaked to the public the illegal surveillance techniques used by the government. He smuggled files from the CIA on an SD card hidden below the center cap of his favorite puzzle.
The opening scene of the movie shows the protagonist twisting a Rubik's Cube in one hand. Later we can see that the character played by Nicolas Cage has a nice twisty puzzle collection.

The winner of the best foreign-film Oscar, this Danish drama tells the story of two troubled boys. The Rubik's Cube can be seen when the two boys meet each other the first time in the classroom.

Will Smith in The Pursuit of Happyness 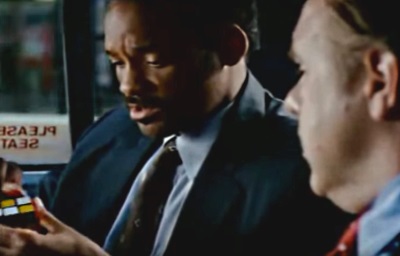 The incorrectly spelt (don’t worry, it’s on purpose) box-office hit, The Pursuit of Happyness, has the cube shown in several different scenes, the most prevalent of which being when Will Smith is explaining to Mr. Twistle how he thinks the cube works. The film is set in 1981, a possible explanation for the cameo of the cube. Chris Gardner (Will Smith) learns of the cube’s existence when he finds one in his kitchen. In a later scene, he is shown solving the first two layers of the puzzle. Finally, whilst in a taxi with Mr. Twistle (who states that he believes the Rubik’s Cube is “impossible”) is surprised at Gardner’s ability to complete the puzzle. This results in Gardner receiving an interview request later on (it is heavily implied that the taxi ride was the provocation for this invitation).

After the film, Will Smith learnt how to solve the cube properly (he did not have to learn the solution for the film), and has even solved it live during a chat show.

The film is based on the year’s homelessness of the original Chris Gardner; however, it is unknown if he actually solved the cube to impress anyone or not. 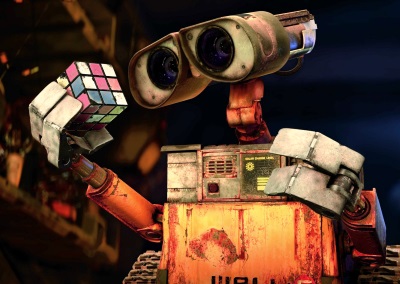 In the popular sci-fi animation WALL-E, the Rubik’s Cube is used as an interaction piece between the two main characters, WALL-E and EVE. Due to WALL-E’s role as a cleaning robot on Earth after it’s abandonment, he collects objects from his cleaning that seem interesting. He is shown placing a Rubik’s Cube he has found into a locker after briefly inspecting it. Later within the film, once WALL-E has met EVE, he shows her the cube that he has found, and within a few seconds (not shown), she has solved it and returned it to him. (A fun fact that there are real Rubik's Cube solving robots, the fastest being able to do it under 1 second.) This scene most likely used to portray the intelligence of EVE compared to the outdated technology used to create WALL-E. In a later scene, WALL-E is unable to recognise EVE, and in an attempt to jog his memory she shows him the Rubik’s Cube that she solved for him. 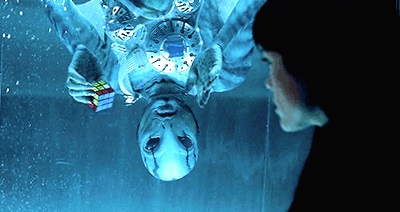 The cube makes another cameo in the first Hellboy film, where Abe Sapien, a psychic amphibious humanoid. In the scene, Sapien is talking to Liz Sherman from behind the glass of his aquarium with a Rubik’s Cube in his hand. As part of their conversation, he says “Listen, I’m not much a problem solver. Three decades, and I’ve only completed two sides”. This is the only appearance of the puzzle within the film. Despite being an intelligent psychic creature, it is interesting that he is unable to complete the puzzle. This could be a method of relation portraying the human side of Sapien to develop a bond between him and the viewer. 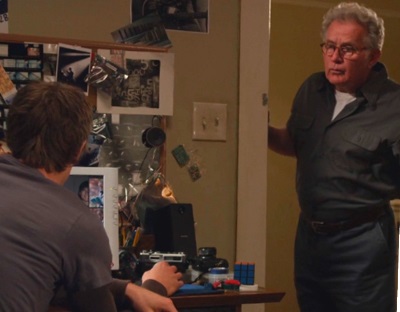 In the popular 2012 superhero movie, Peter Parker and Uncle Ben are conversing in Parker’s room. When Ben enters, he picks up the cube resting on Parker’s desk (note that the puzzle is solved). Ben twists one side and continues to talk with Parker. Once the conversation is over, Ben returns the cube to the desk with one layer misaligned. The theatrical use of the Rubik’s Cube could have been used here to foreshadow the way Parker’s life would go from an organised, normal life to something completely different with one small turn.

The cube has, of course, appeared within several different films, a few being listed below. However, these are in my opinion the most popular films in which the cube has a significance past simply existing as a background object, and how the directors of these respective films have all used it in such a way that adds to the plot of the story rather than just sitting on a table. 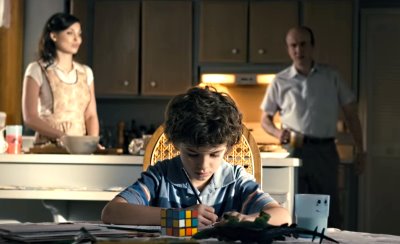 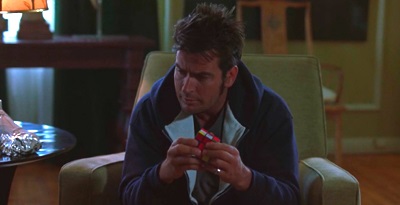 Charlie Sheen throws up the cube in the air and catches it in Being John Malkovich (1999).

Rockhound, played by Steve Buscemi solves a Rubik's cube in the movie Armageddon (1998).

Jesse (Seann William Scott) holding the cube in Dude, Where's My Car? comedy (2000). It turns out it is in fact a "Continuum Transfunctioner". 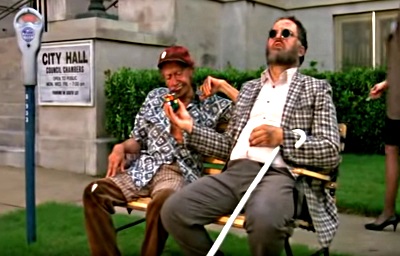 Owen (Kodi Smit-McPhee) holding the puzzle in Let Me In horror drama (2010). 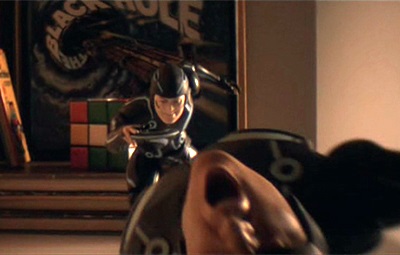