When you take apart a Rubik's Cube and put it back together randomly you have only a 1/12 chance that your scrambled configuration is solvable. In case of other Rubik's Cube variations where the orientation of the center piece also counts the chances are even smaller.

If the online Rubik's solver throws the 'Invalid scramble' error first you need to double check your puzzle and make sure you entered the color of each field correctly.
If you keep getting this error then you'll have to disassemble and rebuild your cube in the solved position because it has an unsolvable state.

Not every random scramble can be solved by legal moves because of the parity which refers to whether a permutation is even or odd (can that permutation be represented by an even or odd number of swaps): 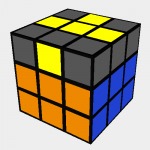 Experienced cubers notice that something's wrong when they reach the last layer of the puzzle.

These scrambles can't be solved, you have to take your cube apart to fix it.

The image above shows another invalid cube but this case can't be reached by taking apart the puzzle and assembling it incorrectly. This has been stickered wrong and it has never been solvable.

According to the center pieces the white face has to be on the top, but there's an orange-blue-yellow corner that would put the yellow on the top when the orange is on the front and the blue on the right. 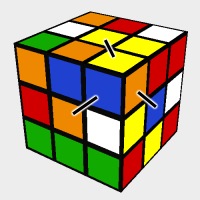 We can never have a white-yellow edge piece when the white and yellow center pieces are on the opposite sides of the cube.