The Curvy Copter Puzzle and Jumbling

We have already introduced to the Helicopter Cube which had 4 centre pieces on each side, and 8 pyramid shaped corners (like a Skewb puzzle but with the centre split in 4). The way the puzzle turned was explained and a vague step-by-step solution was given (kept vague for those who still wanted to try solve the cube without algorithmic help, but they needed a hint for where to start). This article will cover the one difference the Curvy Copter has to the Helicopter Cube in terms of the pieces – An edge piece between each pair of corners. 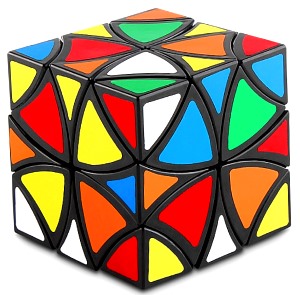 The Curvy Copter, aside from the edges, is solved in a similar pseudo layer-by-layer method as the Helicopter Cube – By solving one side’s centres, then a whole layer, then finishing the puzzle by intuitively solving the centres and performing simple algorithms to solve the corners. The Curvy Copter’s edges make this solution slightly more complex, but still fairly simple in essence. 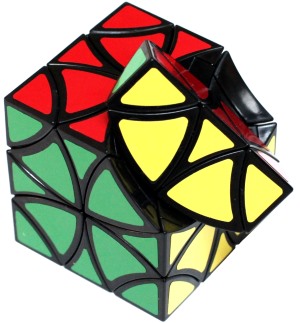 A rotation on the puzzle

The edge pieces serve as the pivot point for any moves you make on the puzzle – This means that, when performing a 180 degree turn, an edge will flip. These edges cannot be moved from their positions without jumbling (see below). When solving your first face, you need to rotate the required faces to get all of the edges of one colour facing upwards. Then, by flipping opposite edges, inserting the corresponding centres into place then flipping them back, the top layer (excluding corners) can be solved.

Because the edge pieces cannot technically move from their positions, they will always be in place. The only difference is that they will sometimes be flipped. By bringing the corners underneath their positions in the same way as both the Helicopter cube and the 3x3 beginner’s method, you can solve them by simply bringing them up to the top layer. The only difference the edge pieces make is that you have to flip the edge piece the right way around before you insert the corner. This can be done by moving the corner out of the way, flipping the edge, and bringing the corner back. The algorithmic way of solving the remaining first layer corners does not affect the edge pieces, so the remainder of the first layer is the same as the Helicopter cube.

The remaining centres can be solved in a similar way to the Helicopter Cube – matching pairs of centres and flipping them into place intuitively. The parity on the Helicopter cube was caused by unknown edge orientation. Because you have visible edges between each pair of corners, this is not an issue on the Curvy Copter puzzle as long as, when solving the centre pieces, you make sure the edge piece between them is the right way round.

The corners are solved in the exact same way to the Helicopter Cube, except algorithms may need to be performed even more times due to some Helicopter cube algorithms flipping the hidden edge pieces (as they are not hidden on the Curvy Copter, they need to be the right way round).

Jumbling either the Curvy Copter or Helicopter cubes results in some pretty interesting solutions. Jumbling can move centres into positions that they previously could not be in. The only difference in a jumbled and non-jumbled solve are the first step (returning the puzzle to a cube-shape, which is fairly intuitive) and using a simple jumble algorithm to swap two centres that could never usually swap places. Just solve the puzzle as you would normally, and when you come across a centre that is in an unsolvable state, use the algorithm to swap it into a solvable position. 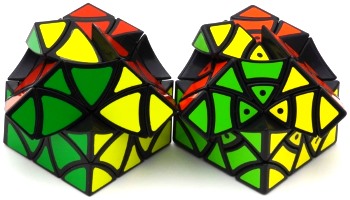