As has been seen throughout its life, the Rubik’s Cube has provided a foundation for many puzzle modifications and designs to be developed and produced. These modifications can be anything from simple sticker modifications to complex shape modification. There have been many variants of the original 3x3 puzzle which have been extended to 4x4 and beyond. This puzzle, however, is fairly unique as, although cube-shaped, it is an entirely different concept altogether. 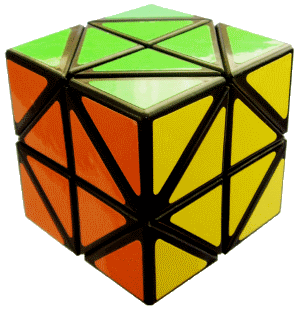 The Helicopter Cube concept was invented by Adam G. Cowan in 2005. The building of the cube didn’t take place until 2006, when Cowan was able to use 3D printing to create his puzzle. It is highly regarded as one of the most difficult puzzles available, as it isn’t just a simple shape modification or increased-difficulty version of a currently existing puzzle. It uses a totally different algorithm set, so solving the puzzle without looking online for hints is a challenge for even the most experienced puzzlers.

The puzzle on first glance looks like it can be turned similarly to a 2x2, with 8 seemingly separate squares making up the puzzle in the same way. However, this is not the case. Moves on the Helicopter Cube can only be tuned around the 12 edges. The cube consists of 8 corners and 24 triangular shaped centre pieces, with 4 centre pieces on each face (similar to a standard 4x4 cube). Without jumbling (see below), the Helicopter Cube can only be scrambled and solved using 180° twist moves (also known as half turns). Each move will flip the “edge” piece, which flips two corners and two pairs of centres. 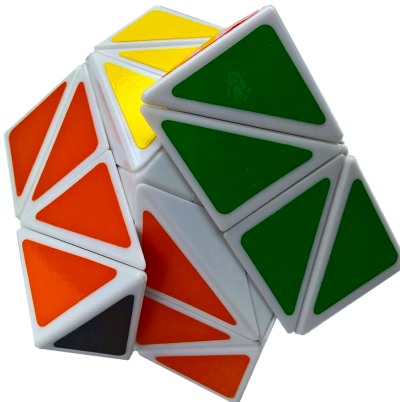 The Helicopter Cube turns along the edges so it has 12 rotation points,
twice as many as a normal face turning cube like the Rubik's Cube.

Solution of the Helicopter Cube

The cube uses a completely different notation to normal puzzles, slightly resembling that of a Skewb or Megaminx. The solution strategy to this puzzle is similar to that of other puzzles, but using completely different algorithms and moves. In this article, a walkthrough of how the puzzle is solved will be detailed, but no algorithms will be provided. This is done in case you’d like to have a go at solving it without cheating, but you’re not really sure how to go about it. This guide will explain how to solve the cube in its non-jumbled state (see below).

The cube is solved by first building one entire centre. This is done pretty much intuitively – If you’re able to solve other twisty puzzles and have a basic knowledge of how moves you make can affect the cube you’re solving, then you should be okay. Think of it like a 3x3 cross – It’s the first stage of the puzzle and forms the building blocks for completing the first layer.

Secondly, you can solve the four corners for the centre you’ve just built. This is also fairly intuitive, similar to the first four corners on a standard 3x3 cube. However, after inserting the corners on a 3x3, you would be done with the first layer. With the Helicopter Cube, there are two centres between each pair of corners on every side, so you still need to solve those centres before the cube is half completed. This can be done in a similar way to the middle layer edges using the beginner’s 3x3 method. By moving each centre piece below the corners using bottom-layer moves only, you can perform one of two algorithms depending on both the position of the centre piece and its intended destination.

The next step is to solve the remaining centres. This is also a very intuitive stage – Just match up two centres then swing them down into their correct place. This solves one side’s centres. Keep doing this until you’ve solved all four of the outer side’s centres. Once done, the top centres will be automatically solved.

Once you’ve solved the centres correctly, the “fun” begins. This is where algorithms are really helpful, so if you’ve reached this point and can’t finish the cube without looking online then I forgive you. The 4 corners need to be permuted before they are oriented, just like a 3x3. First, you need to check how many corners are “solved”. Solved in this case means in their correct position, regardless of rotation (i.e the yellow orange blue corner is between yellow, orange and blue centres). There are 4 possible outcomes for this:

The Curvy Copter, as is explained in the article explaining jumbling, has visible, stickered edge pieces between each pair of corners. Technically, the Helicopter cube also has edges, but you can’t see them. If you have two corners correctly permuted, this means that one of the “edge” pieces on the puzzle is flipped. This requires an extra algorithm to flip the edge. There are two variants of this algorithm, one which requires a slight knowledge of jumbling, and another which is longer but uses only normal moves.

Once the corners have been permuted, they can be oriented, solving the puzzle. To orient the pieces, there are methods with varying numbers of algorithms. The more algorithms you learn, the more efficient your solving will be. However, only one algorithm is needed to be able to solve the cube (although you may need to repeat it up to 18 times).

The Helicopter Cube can also be “jumbled”. This means that the cube can shapeshift by making moves whilst a layer is misaligned, separating the previously solid “edge”. A further explanation of jumbling will be covered in the Curvy Copter article.