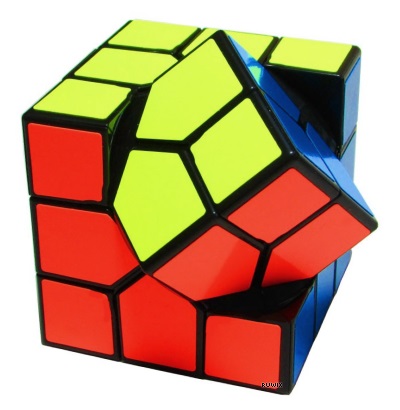 The Redi Cube, a corner-turning puzzle.

Released, in early June 2017, the Redi Cube was designed by famous puzzle designer Oskar Van Deventer, and produced by Moyu. It is a three layered corner twisting puzzle, where each corner turn moves the three edges around it. The puzzle is not an official WCA competition event.

The Redi Cube can be solved intuitively, which means that experienced cubers should be able to solve it without the aid algorithms, although there are simple algorithms in this tutorial.

How to solve the Redi Cube 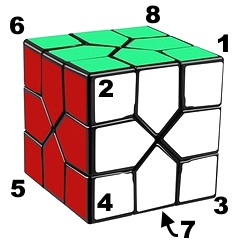 A solve of the Redi Cube is very similar in comparison to the traditional 3x3x3. We solve each layer one by one. However, there is no set notation for the puzzle so for the sake of this tutorial we have created our own notation.

Since the Redi Cube is a corner twisting puzzle, we have assigned a number to each corner, which is dependent on the position you are holding the puzzle in.

When holding the puzzle, the top right corner is number 1. 2 is the top left corner of the side facing towards yourself, 3 is in the bottom right, and 4 is the bottom left corner of that same face. Use the diagram to locate the rest of the corners corresponding to the aforementioned locations of the first 4 corners.

The first layer we will begin to solve is the white face. Locate the the for corners which are next to each other that have a white sticker. Orientate (turn) the white corners so that all the white corners face so they all face upwards.

The red/white edge is on the right middle slot of the right face.

The next step is to solve the edge pieces and slotting them into place. Use the bottom four corner pieces to move the an edge to the right side of the coloured face.

Try to do the first three pieces individually. To move the last (red/white) edge into the solved position, use the algorithm 4i, 2i, 4, 2 as seen on the image.

First of all, put the white face on the bottom. Then orient (turn) all the remaining corner so that the yellow stickers are facing the top 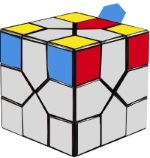 Next, we need to find any edges in the top layer that does not have a yellow sticker on it. For this example we will use the red/blue edge.

To move the blue/red edge from its position to the solved position, use the algorithm 2i, 1i, 2, 1 with the red side facing towards you. 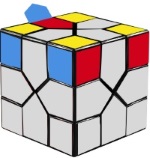 If the blue/red edge piece is one the opposite side, of the yellow face, use the algorithm 1, 2, 1i, 2i with the blue face facing towards you to move the edge into place.

If you have a case like this, use the algorithm 2, 1, 2i, 1i to solve the edge into the position. This will keep the yellow corners correctly oriented.

The inverse algorithm to this case is 1i, 2i, 1, 2 move it into the solved position

Continue solving the edge pieces so that all middle edges are in the correct position. 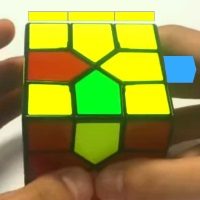 There will always be 3 solved sides at this stage, the yellow, white and one other colour side. Put the other colored side on the back face.

The first case will be three edges that need to do a cycle. The algorithm to solve this case is 2, 1i, 2i, 1i. 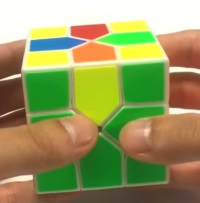 If the blue edge or equivalent piece is on the opposite side, use the algorithm 1, 2i, 2i, 1. 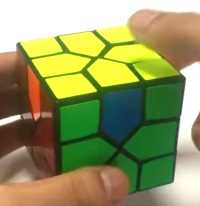 Congratulations, you have solved the Redi Cube!