We use letters to describe a rotation on the cube. Learn to read the Rubik's Cube Notation and you'll be able to perform all algorithms you see in the solution tutorials. The good news is that learning onlyif six intuitive letters is sufficient to solve the cube but if you are a speedcuber you should learn the advanced notation which you can access from this page.

A single letter by itself refers to a clockwise face rotation in 90 degrees (quarter turn):
F R U L B D

A letter followed by an apostrophe means to turn that face counterclockwise 90 degrees:
F' R' U' L' B' D'

There is another commonly used notation where the uppercase means a clockwise and lowercase means a counterclockwise turn, but this is not the official version because for other twisty puzzles the lowercase letter marks a different thing.
e.g. R U r U R U2 r U

Sometimes they mark the inverse rotations with the capital face initial followed by a lowercase i
e.g. Fi means front inverted.

For the beginner's method you just have to know the simple F (front), B (back), R (right), L (left), D (down), U (up) turns but there are more complicated moves for speedcubers which manipulate the middle layer or two layers at the same time or reorient the whole cube.

The interactive widget features a 3D cube to demonstrate the Singmaster notation, but unfortunately this is not yet supported in all browsers. If your computer can't render this HTML5 Rubik's Cube properly please see the one in the box below. 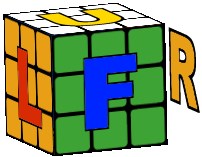 The faces of the cube marked with their initials