However this is a non-twisty puzzle I must mention it on a separate page because in the 80's this was the second most popular puzzle beside the Rubik's Cube. These puzzles were both patented by Rubik Ernő, the Magic following the cube in 1987. Its original Hungarian name was Karikavarázs which means Circle Magic. 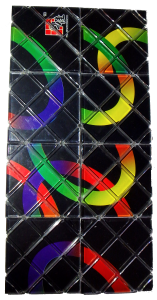 The toy consists of 8 tiles attached together with 16 fishing lines allowing it to be folded in almost any direction forming various shapes. The goal is to attach the three separated circles painted on the tiles, this way changing the original 2x8 arrangement to a triangular shape. The puzzle has only 96 possible plane permutations.

The solution of the Rubik's Magic

The solution is not such a big challenge because the players always have to execute the same folding moves to reach the solution. In this case the speed is what matters. The Rubik's Magic used to be an official WCA competition event until 1 January 2013 when it was cancelled. The players reached times under one second.

Basically this one has the same functionality as its smaller brother, the difference is that it has been expanded with four extra tiles increasing radically the number of possible permutations, making the game more exciting. As you can see on the attached image, the goal here is not to concatenate but to separate the circles.

The Master Magic can take up 22 different planar shapes (while the Magic can form only two) and all of these 22 shapes has 96 different possible permutations of the tiles. The game is manufactured by the Hungarian Rubik Stúdió and the British Rubik's which can't be distinguished by appearance. The only difference is the binding which requires to execute mirrored the moves on the different brands.