The Floppy Cube is a 3x3x1 Rubik's Cube and it was invented by Katsuhiko Okamoto the inventor of the Void cube, Master Skewb, the fully functional 3x3x5 Cube, the Master Pyraminx and much more. He also made different versions of the 3x3x1 Cubes, like the Floppy Octagon (a Floppy Cube truncated into the shape of an octagon), Penta Floppy (pentagonal version), Hexa Floppy (hexagonal version), Scramble Cube (also known as Super Floppy Cube).

The 3x3x1 Floppy Cube is a single layer cube, having 9 cubes arranged in a square. It has 9 white and yellow stickers on the top and bottom and 3 green, orange, blue and red stickers on the sides. Only the corner pieces can switch places, so it has 192 possible permutations.

The sides can be turned 180 degrees and halfway through a move the center piece flexes a little bit, letting the corners stay connected to the center.

The highest order N x N x 1 fully functional cuboid ever made is a Royal Floppy Cube. This puzzle is a 9x9x1 Floppy Cube and it has large outer pieces to hold the smaller inner pieces together.

To solve a Floppy Cube first orient the four edge pieces according to the color of the yellow and white center piece. This is maximum one turn for each face. 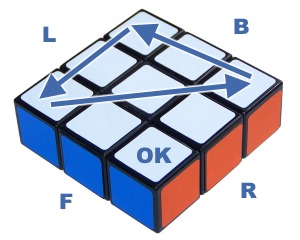 The Super Floppy Cube was also invented by Katsuhiko Okamoto, and he originally called it the Scramble Cube.

This is a more complicated version of the Floppy Cube, where you can make quarter turns of the faces. This is the reason why there can be up to four corner pieces around a single edge piece, and it's possible to have an edge piece left alone with no corner piece at all.

Scrambled shape-shifting Super Floppy Cube and a regular one.

The LanLan Super Floppy moves much smoother than the classic 3x3x1 even without lubrication. It has very good quality rounded stickers. It can be used as a classic Floppy Cube if you don't make quarter turns, just half turns.