The Void Cube was invented by Katsuhiko Okamoto and it is similar to the the 3x3x3 Rubik's Cube, but it has no centre pieces just holes so you can look through it. The typical centre core which holds together the Magic Cube is missing. Because of its mechanism it doesn't move so smoothly like a normal Rubik's Cube and it doesn't cut corners so well but it's still a nice puzzle and a great collection piece. If you want to try how it works you can easily simulate it by pealing off the stickers from every centre piece on a Rubik's Cube.

The Void Cube is a little bit more complicated than the Rubik's Cube despite the fact that both puzzles have the same number of possible permutations. It is more difficult because you don't see the colour of the centre pieces, which determines the colour of each face, so you have to check the corners to find the correct colour scheme and figure out which faces come next to each other. And if you solve one face around the wrong centre piece you can find yourself in a parity. In this case you can rebuild the pieces around another imaginary centre piece or you can cheat by applying an algorithm.

For the Void Cube solution first you have to understand the notation and the solution of the Rubik's Cube, and when you know this you have to apply the same solution and the parity algorithms as a final step if necessary. If you don't understand what the letters mean first learn the Rubik's notation. In case of parity use the following algorithm, even if you have a corner or edge parity, this relocates the centres, and after that solve the last layer again as normal.

The Void Cube was just the beginning of a series of holey 3D mechanical twisty puzzle. Indisputable this is the most basic and famous version but we have to mention here the Holey Megaminx, Holey Skewb, the LanLan Edges Only cube, but there is Void 6x6x6 with a 2x2 hole and the list goes on.

And finally a bonus: the Void Truncated Icosidodecahedron! 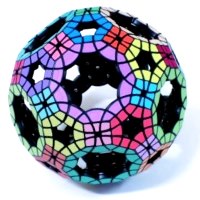 The Void Cube is the most famous holey twisty puzzle