Home » Blog » Will Smith demonstrating how to solve the Rubik's Cube

You might know that we have a Rubik's Cube tutorial section for beginners. Reading your feedback in the comment section we've realized that people get stuck at this point or have difficulties finishing the cube. Many people get confused when they reach the very last step where they have to orient the yellow corners in the last layer repeating the R' D' R D algorithm.

To solve the problem and make the trick easy to understand we've put animated examples that visitors can play back. Now we're going further and we're publishing a video on our YouTube channel with Will Smith presenting this method. He does the same steps, but instead of using our traditional R' D' R D notation he's repeating Down-away-up-back and says Boom when he finishes one corner piece.

We've added an animation to help you follow the steps he's doing. Make sure to subscribe because we're planning to upload more videos of celebrities playing with the Rubik's Cube. 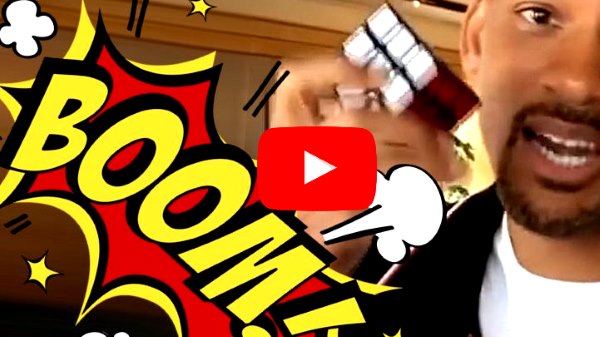 We discovered the original video on Mariesa Keef's YouTube channel. In the full video Will explains that he was doing an interview in Mumbai and he wasn't able to finish it when the interviewer handed him a scrambled cube despite he used to be able to do it. Will posted this video to prove that he has still got the moves.