On this page you can find a detailed description on how to solve the last layer corners of the Rubik's Cube. In the final phase of the solution with the beginner's method we will orient the yellow corner pieces.

The cube is solved

When you reach this final step all the pieces are on the right spot, you just have to orient the last layer corners which are now on the top of the puzzle.

Hold the cube in your hand so the upper piece you want to orient is on the front-right-top corner, then do this algorithm twice or four times until that specific piece is oriented correctly:

In the meantime it might seem like you messed up the whole cube but don't worry, it will be all right when all the corner pieces are oriented.

When a yellow corner is oriented correctly, turn the top layer only to move another yellow corner piece you want to orient to the front-right-top corner of the cube and repeat R' D' R D again until this specific piece is OK.

Keep doing this until your Cube is solved.

Many people mess up their cube in this final step because they skip the last D turn as soon as they see the yellow sticker facing up at the top. Make sure you complete the whole R' D' R D algorithm.

Don't rotate the whole cube while doing the steps! Face rotations only and follow the steps carefully.

See the diagram, animated examples and video below for a more detailed explanation! 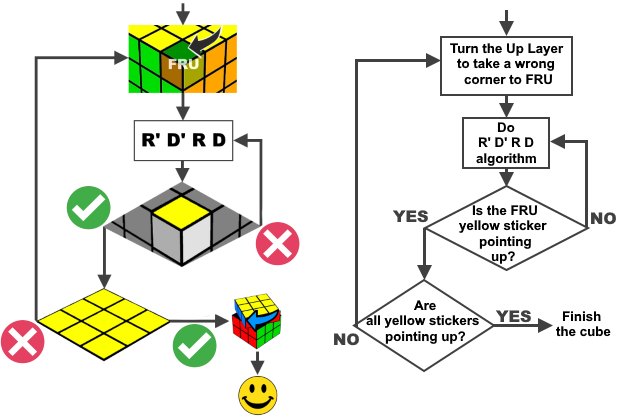 Demonstration by Will Smith

You might remember The Pursuit of Happyness movie (2006) in which the character played by Will Smith solves the cube to impress his future employer and receives an invitation for a job interview. Watch the video below where he demonstrates the R' D' R D method. He's using a slightly different down, away, up, back notation though, but that's doing the same thing. He says Boom when he finishes a piece and brings another misaligned corner to the FRU position.

To see the animations just click the play button and follow the steps. Adjust the speed if it's too fast for you. We have separated the R' D' R D bits so you can see better how to apply this algorithm.

Two wrong pieces next to each other: do R' D' R D twice for one corner and four times for the other.

For three corners: The algorithm has to be applied twice for each corner.

When you meet the orientation below the algorithm has to be executed 4 times for each corner.

Two corners on opposite sides.

It requires a total of 12 iterations when all yellow corners are twisted.

These algorithms may seem to be long but they're repeating the same R' D' R D sequence all the time, so you just have to memorize this short algorithm and the method how to use it. With a little practice you'll perform these very quickly.

Congratulations! You have solved your Rubik's Cube!

Is this tutorial too complicated for you? Here's what you can do:

Read another guide at Rubik's Cube Solution or at how to solve a Rubix Cube.
Use the Online Rubik's Cube Solver, insert your scramble and the program will calculate the solution.

Previous stepBack to the tutorial