The History of the Rubik's Cube World Records

A World Record is something every speedcuber dreams of having. It is the most prestigious accomplishment and helps bring more public attention towards speedcubing, as many news companies publish articles when the 3x3 Rubik's Cube World Record has been broken. Although there are 18 different WCA events that all have World Record holders too, I'm going to be concentrating on the most publicly recognised of them all – The 3x3 World Record Single.

Since 1982, only 18 people have ever held the World Record single. Of these 18 people, only one person has ever had the record, lost it, and then gotten it back again: Erik Akkersdijk and Edouard Chambon. But for now, let's start in chronological order.

The Stackmat timer is used on competitions

After the immense popularity the cube received upon its release in 1980, 19 competitions were held, all in different countries, to decide the fastest speedcuber of that nation (these are not listed on the WCA). On June 5th, the 19 fastest speedcubers of that time gathered in Budapest, Hungary, to compete in the first Rubik's Cube World Championship, with the puzzles inventor, Ernő Rubik, as delegate. On that day, 15 National Records were set, along with the continental records for Europe, Asia, and South America, and of course the World Record, which was set by the American Minh Thai at 22.95 seconds.

This was the last competition the World would see for over two decades. Popularity faded, and nobody was there to take up the role of organising any new competitions. In 2003, however, the World Cube Association was founded and a competition was scheduled for August 23rd-24th. It took place in a science centre in Canada.

This competition showed that not much improvement had been made over the first competition 20 years before. The World Record was broken twice, first to 16.71, then to 16.53 by Dan Knights and Jess Bonde respectively.

As competitions grew greater in number, more and more record hopefuls appeared. In 2004, Shotaro Makisumi single-handedly dropped the record from 16.53 to 12.11 in two separate competitions. He beat the record 4 times, twice in both competitions.

Evolution of World Records since 2004.

Despite large time drops in previous years, 2005 was a very quiet year for records. Jean Pons broke the record at the Dutch Open, but not by much. At the end of 2005, the record stood at 11.75. In 2006, however, two Americans helped drop the record down to a staggering 10.48. In early 2007 the French took back the record with a 10.36 single. The first under 10 second solve was just around the corner. The man to hold this title was to be Thibaut Jacquinot. At the Spanish Open 2007, he set the new World Record as 9.86 seconds, a record that some believed would stand a long time.

However as 2007 drew to a close, the record was broken twice more – First by Erik Akkersdijk with a 9.77, then by Ron Van Bruchem, one of the four Board Members and one of the two founders of the World Cube Association, with a 9.55. It appeared that as soon as the 10 second barrier was broken, the times came flooding in. Edouard Chambon gained the record back with a 9.18 solve in February of 2008, only to have in taken back by Yu Nakajima in May. Yu made history for a different reason too – Not only did he break the 9 second barrier with an 8.72 single in the second round of the Kashiwa Open, but he solved the Rubik's Cube in the exact same time at the final of the same competition.

Yu held the record for a mere three months however, and the next record is considered one of the greatest records in history. Erik Akkersdijk, just three months after the sub-9 barrier had been broken for the first time, nearly broke the sub-7 barrier by solving the cube in 7.08 seconds. This was monumental; so much so that this record stood for 854 days until November 2010. It was the longest standing record since Minh Thai's 1982 record.

However in 2010, Feliks Zemdegs appeared on the Record scene, and he had only started to make his impact. He solved the Rubik's Cube in 7.03 seconds, just beating Erik's solve in November 2010. On the same day, he then broke the 7 second barrier by solving the cube in 6.77 seconds. Throughout the duration of 2011, he broke the record 4 times, to 6.65 (which he did twice), 6.24, 6.18 and finally, breaking the 6 seconds barrier to 5.66. Two years passed before this was broken again, except this time it was by the Dutchman Mats Valk. He knocked 0.11 seconds off of the record, solving the cube in 5.55 seconds.

This record stood for another two years until in April 2015, American Collin Burns solved the cube in 5.25 seconds. This was the first time and American speedcuber had held the record for 9 years.

Over time, the cube has seen many different people of all nationalities solve it just a little bit faster than the person before it. Jessica Fridrich predicted that her method used by Etter to solve the cube in 4.90 seconds was capable of 13 second solves at max. There is no doubt that we will see more improvement in time to come. But for now, we just have to play the waiting game.

The current World record is held by Yusheng Du (3.47), who shave off 0.75 seconds from the previous record set by Feliks Zemdegs (4.22 s). His record is the one and only Sub4 solution achieved on a competition. 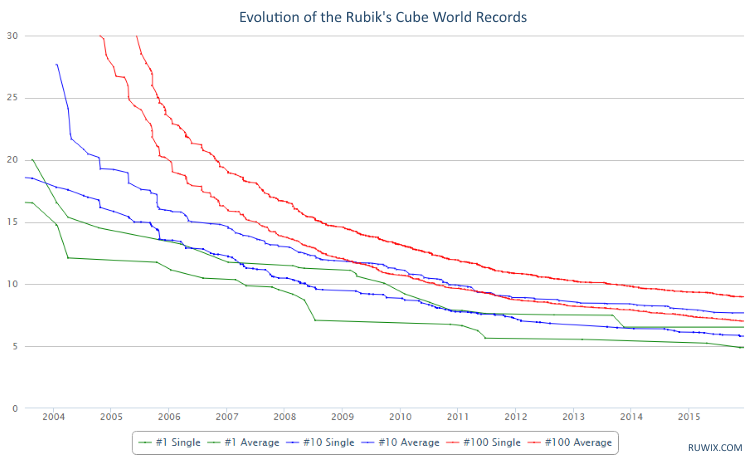 Source of the graph worldcubeassociation.org

Go to cubecomps.com to find out the latest Rubik's Cube World and National records almost in real time.