Feliks Zemdegs, Australian speedcuber has set a new Rubik’s Cube world record single (not average) in the first round of the Cube for Cambodia 2018 on May 6th, 2018 Victoria, Melbourne Australia. The time was just a mere 4.22 seconds, 3 tenths of a second faster than the previous record held by Feliks Zemdegs and SeungBeom Cho (조승범) of 4.59 seconds. He now owns the World record single again making it a solo title. The cube used to break the record was a Angstrom Gan Air Sm.

Feliks Zemdegs (WCA ID: 2009ZEMD01) is an iconic speedcuber who has competed in 76 competions so far. He also holds the most World records such as for the 5x5, 3x3 OH (one handed) and Megaminx twisty puzzles. He has a Youtube channel (Feliks Zemdegs) with mostly videos from competitions, averages and other cubing related topics.

This is the first official sub-4.5 solve and it's closer to 4 than 4.5! This new record is expected to last for a long time. We can't tell now for sure but the time breaking this record might be one day the very first sub-4 solution. One title however will always belong to Feliks that he was the very first cuber to solve the cube under 4.5 seconds. You might remember that in November 2015 Lucas Etter broke the sub-5 barrier. 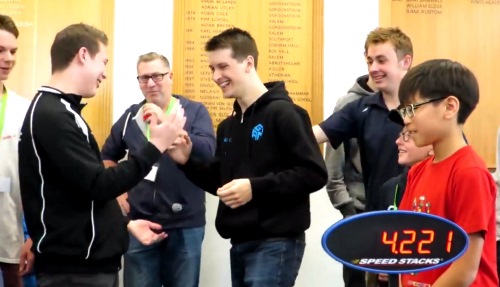 The record holder used a yellow X-cross, smooth F2L and an easy OLL and PLL skip. If you are not a cuber and you don't understand what these abbreviations mean please read about the cubing terminology.