Demonstrating face, slice, double and whole cube rotations. With a mark on the FRU corner.
Press Play to start.
On the Rubik's Cube Notation page I have presented how we mark the basic face, middle layer (slice) and cube rotations. Let's go further and discuss the advanced notation what you often meet while reading Rubik's Cube algorithms. 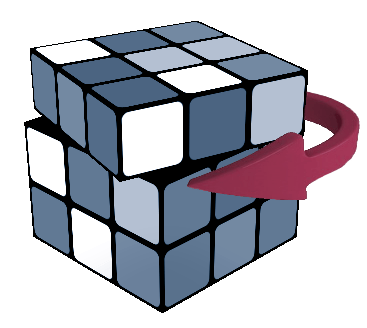 U: Up face clockwise
We mark the 6 faces of the Rubik's Cube with a letter according to our perspective as we hold the puzzle with one side facing us and an one parallel to the ground:
F (Front), U (Up), R (Right), B (Back), L (Left), D (Down).
F R U L B D 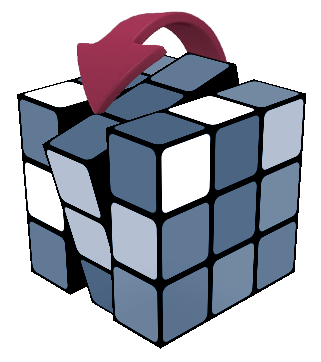 Two layers at the same time 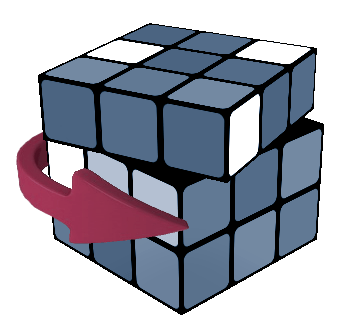 d or Dw: the two bottom layers clockwise
Double turns are marked with the lowercase letter of the corresponding face: f, u, r, b, l, d. For example d means the clockwise rotation of the two bottom layers. Dw means the same move but this notation is mainly used by Japanese cubers. Rarely they mark these turns with 2D (the number comes ahead because D2 means a double D).
Multiple-layer turns are necessary to solve higher order puzzles like the 4x4x4 Rubik's Revenge.
In some cases you might find Rubik's Cube algorithms with lowercase letters meaning the counterclockwise rotation of a face but this is rare.
d = D E 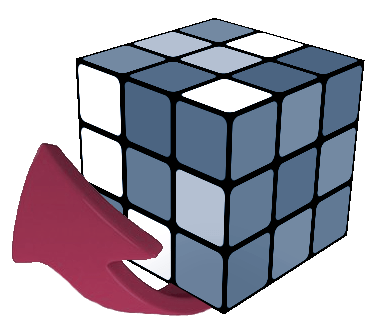 Whole cube rotations can be marked with either lower or uppercase letters. 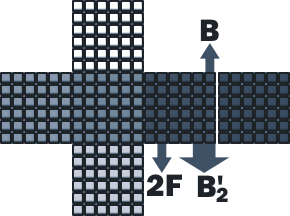 Big cubes allow deep turns and slices
The notation of the Rubik's Cube applies to the big cubes too but the deep turns and inner slice turns also come in. 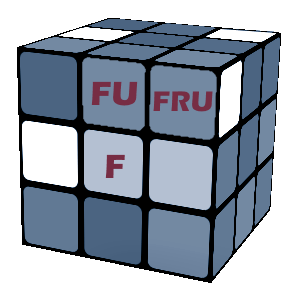 FRU: front-right-up corner piece
There are three types of pieces on the Rubik's Cube: centre, edge and corner pieces.
There's only one centre piece belonging to every face so we mark these with the uppercase letter of the face it belongs to: F marks the front centre piece.
An edge piece is determined by the two faces it belongs to: FU - the front-up edge.
A corner piece is described by the three faces next to it: FRU front-right-up corner.

You can find brackets in the Rubik's algorithms because we group together fragments (triggers) that are easy to execute.
There's no officially adopted finger trick notation but the DeeDubb (DW) notation for 3x3x3 cubes is widely used. This has been presented in the speedsolving.com forum.

Finger tricks are used in speedcubing to reduce the solution time. The goal is to describe a Rubiks' Cube algorithm in the most comfortable and efficient way to execute with the human hand. Taking down the hand off a side and repositioning always takes time so we're trying to execute more operations at the same time. The more overlapped moves and the less regrips, the faster you execute the operation. For this we use triggers which are short sequences of face turns which are easy and fast to execute. Usually you can see these fragments in brackets in the algorithms.

For example instead of doing R U F' we can simply do a R d R' avoiding the regrip.

This notation is based on describing three things: the finger, the puzzle piece and the grip of the fingers on the cube.

The piece notation is the same as described above on this page.

Perform these moves on a 3D Rubik's Cube