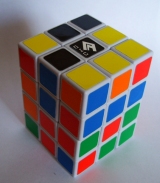 The 3x3x4 is a fully functional 4 layered cube puzzle. The pieces have the same size as a 3x3x3 but there's an extra layer.

The puzzle is available in black and white body colors and comes in a DIY kit from the factory. You have to put it together and apply the vinyl stickers. It has the classic 3x3x3 core mechanism in the inside.

It has a very good quality, it moves excellent after lubrication and setting the tension. Letting the screws too loose you might have the feeling that the puzzle is going to fall apart, but making it too hard can make the turns harder. Try to find the balance according to your taste. Overall the puzzle can be used for speedsolving, it cuts corners and doesn't pop the pieces.

You can solve the puzzle layer by layer following the steps below with the help of the picture on the right. R, L, F, B means 180° and U, D means 90° turns of two (!!!) layers, and after step 5 it means only one face turn.

Algorithm to switch the two edges in the bottom-middle layer in the back:

3. Middle pieces to their layer

If in one of the middle layers there are two center pieces with the same color then bring the center piece from the bottom left side to the upper right: 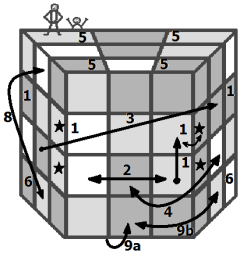 If they're next to each other switch the bottom-front center piece with the bottom-right:

5. Corner pieces to their layers

Do it intuitively, according to the color of the 3x3 center piece.

Until this point the U and D meant a two layer turns, from now on it is just one face turn!!!

Algorithm to switch two corner pieces in the bottom-back:

Turn the cube upside down and use the previous algorithm.

8. Upper and bottom edge pieces to their layer

Switch the upper-left edge with the bottom-left:

9. Solve the upper and bottom edges

a) If they're in opposite sides switch the one in the bottom-back with the bottom-front:

b) If they are next to each other switch the one in the bottom-right with the bottom-front:

These algorithms also switch the center edge pieces in the front, marked with a star, so when you are doing these algorithms the second time move these pieces to the marked spots to set them right.

If the edges marked with the stars are switched:

u - turn only the middle layer
U - turn both top layers