Feliks Zemdegs, Australian speedcuber has tied the previous 4.59 seconds Rubik's Cube single record of SeungBeom Cho, registered less than 3 months ago. The two cubers now share the world record for the fastest solution time on an official WCA competition. They both have PLL skips, which means a lucky situation when the pieces come together when they reach the very last step of the advanced method (CFOP). 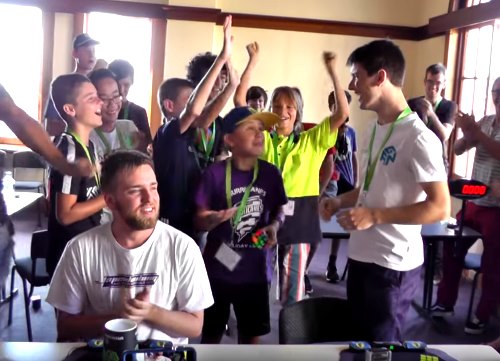 If we take into account one more decimal then SeungBeom Cho's 4.591 result is 3 miliseconds faster than Feliks Zemdeg's 4.594 but they measure hundredths of seconds on official competitions, not milliseconds so this means a tie.

The event was held in The Friends' School in Hobart, Australia (Tasmania) on Jan 27, 2018. Feliks had an average of 6.28 seconds in the first round of the competition, his times being: 7.30, 5.79, 8.61, 4.59 and 5.76. On official competitions they calculate the average of 5 solves dropping the best and worst times and take the average of the three middle solves.

Play back the animation below to see the reconstruction:

A video of the new record was published on Feliks' YouTube channel, which you can watch here:

The new record proves that it is possible to go lower in solution times and I hope we'll see someone take over the title individually.