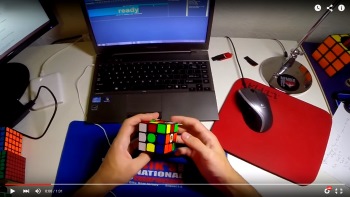 Probably the best and easiest way of reviewing twisty puzzles or making solution tutorials is through a YouTube video because it's easier to demonstrate this way how the puzzle works. We have collected the most important cubing channels which specialise in cube reviews, tutorials, unboxing videos, how-tos, competition footages but there are custom puzzle builders in our list who unveil their inventions on their YouTube channels.

The subscriber count in the article is informative and might change over time. It was recorded early 2021 and it might help you keep track of the growth or decline of a channel.

Don't forget to subscribe to their channels and give them a thumbs up!

Subscribers: 1.5M
This channel is the English version of a Russian youtube channel. It is very popular and many people were surprised at its extremely fast growth. The videos are nicely edited, however he does not rerecord the videos, rather, he takes the audio away from the initial clip and adds in English words. He does not make solely cubing content, but the majority is cubing. He is not sponsored by a cubing store, unlike most of the others on this list. Solving a cube while skydiving is one of his most daredevil videos, and he keeps surprising us. He once even solved a 17x17. Subscribe to his channel and he'll never stop surprising you.

Subscribers: 1.2M
One of the most popular English cubing channels who puts out fresh and quality content frequently. The author Dylan Wang has got his first cube as a Christmas present from his parents and he has a sub-6 record.

He makes tutorials which are seen by millions in some cases, puzzle reviews, solve reconstructions and Q and A’s. Many people watch him, and many have been inspired to create their own channels by watching him. He is sponsored by SCS, and recently passed 500,000 subscribers, half a million!

Subscribers: 500K
. Alex Walker, the host of this channel has a collection of more than 200 puzzles.

Z3Cubing, formerly known az LegoBoyz3 is a popular cubing and entertainment channel. Alex Walker, is an American YouCuber. He started uploading in early 2014 and has not stopped since. Over this time, he has amassed over 300,000 subscribers and makes more or less weekly videos. He was one of the first to mod cubes on YouTube, having now modded over 100 cubes. He frequently does QnA's, challenges, unboxings and other creative videos. He is sponsored by The Cubicle. He has a handmade intro to his videos, made with over 5 hours of time, a Z3 cube that he made, and an elaborate setup to ensure the best positioning. His dedication is astonishing, and he is easily one of the best YouCubers out there.

Subscribers: 30K
This is our own channel with Rubik tutorials in many languages, 3D printed shape mods and other interesting videos.
We try to post as often as we can. - Once every year, so don't worry because your news feed won't be flooded if you subscribe to us 😁

Subscribers: 400K
Cubeorithms doesn't post too often but I'm sure you'll find something interesting among his videos. He combines his two hobbies, animation and cubing in his vides. His videos tend to be very entertaining and informational when he does upload. He is sponsored by SCS (Speedcube Shop) like J Perm above, and his most viewed videos are ‘Cubing in Public’ and ‘I Stole Someone’s Cube’. His nickname is Blue. He has also made many cubing animations about how he got into cubing and his experience of it.

Subscribers: 600K
Tingman and his daughter post wholesome cubing videos weekly that will make you smile :)

Tingman is a channel run by Ming Dao Ting and features himself and his two kids. They are Australian and make all sorts of cubing videos; their aim being to produce "wholesome weekly cubing videos." He is sponsored by Daily Puzzles and recently passed 100,000 subscribers. He is known for his competition vlogs, many featuring world champion Feliks Zemdegs, and creative unboxings. He also recently solved a 19x19 on a 6 hour livestream to raise money for charity. A very good YouTuber, he has also organised several competitions, and one of his most popular videos to date is the 'One Cube, Many Cubers' video, which features famous cubers solving a cube one move at a time.

Subscribers: 3.5M
Having the most subscribers in this list, this Spanish cube vlogger who is very active. He posts videos with all kinds of puzzles, logic games and curiosities.

He is probably the most subscribed YouCuber, with only a few others even having passed the elusive 1 million subscriber threshold. His most viewed videos are his tutorial, with 43 million views, and him solving a 15x15, with 7.7 million views. He is one of a very few number of foreign language YouCubers, and most likely one of the only ones still uploading.

Subscribers: 1.25M
TheMaoiSha also has a Golden Youtube Play Button Creator Award. He used to be the most popular Spanish youtuber who stopped posting fresh content 3 years ago. He used to share his passion with the world in form of tutorials, reviews and unboxings.

Subscribers: 230K
Cubing Encoded has amassed a large following through his wide range of content: from reaction videos, competition vlogs to featuring cube-solving robots and everything in between. People have taken notice of his creative Youtube shorts, and the videos featuring his little brother never cease to entertain many. He inspires his audience and maintains transparency regarding life updates, all of which are received with positive feedback.

Cubing Encoded began posting 7 years ago, surpassed his Youtube goal of 100,000 subscribers, and has not stopped since then. His channel has matured with his person and audience, apparent through editing style and the progression of content throughout the years. More recently, CE has begun to venture into posting more openly about his college lifestyle, making for more relatable content as his audience grows, all while maintaining his childhood passion for cubes.

Subscribers: 400K
Kenneth used to post twisty puzzle videos on his YouTube channel. Unboxings, design patterns, cube reviews, 3D printing, solves and his speciality: "cube in a bottle". However, his last upload was a year ago, in December of 2019. This upload was part of a cube creation advent calendar, in which many YouCubers made custom cubes and made a video on them and the creation process. His contribution was a 2x2x3 Baby Yoda cube while his most popular video is a 17x17x17 cube solve time-lapse. He has just over 400K subscribers, and his channel was made in 2009.

Subscribers: 150K
From modifying puzzles to solving them, MeMyselfAndPi has some of the most popular tutorials in the cubing community but he hasn't posted for 5 years. MMAPGaming is his other YouTube channel with Minecraft gameplays.

Subscribers: 500K
Feliks Zemdegs Rubik's Cube world champion posts competition videos and various tips regularly on his channel. The greatest cuber of all time according to many, his channel has 434K subscribers. He uploads solve videos and competition solves, but if you scroll back through his videos, he has example solves and tips that are still applicable today, despite being made 9 years ago.

Subscribers: 170K
Tony Fisher is one of the most important custom puzzle designers who started building and modding in the 80's and he's still a very active YouTuber.

Subscribers: 108K
The channel of Oskar van Deventer, a Dutch inventor and designer who made hundreds of innovative puzzles. Oskar Puzzles offers a large variety of 3D printed puzzles for sale, like the Guiness World Record holder 17x17x17 cube.

Subscribers: 150K
A small channel with just a few NxNxN tutorials and no recent posts, but the high ratings make us include TheSergsB in our list.

Subscribers: 330K
Cubing for everyone - JRCuber is mostly a speedcuber but he also loves modding and puzzle collecting and he makes unboxing videos, reviews, videos on his latest mods.

He is sponsored by The Cubicle. He has been uploading pretty consistently for 10 years. He makes unboxings, reviews,and solve videos of hard cubes. He has around 350K subscribers. He, along with fellow sponsoree Z3Cubing, started the trend of calling cubing YouTube channels two characters and then cuber, cubing, or cubes.

Subscribers: 36K
Badmephisto's channel and website lists normal, blindfolded and one handed tutorials but he's specialized in the advanced Fridrich method. He used to be a very acknowledged YouTuber in the speedcubing society but he's really secretive about his real identity. His last video was uploaded 8 years ago and the last cubing related content was published 11 years ago.

Subscribers: 60K
Besides Badmephisto's channel, this used to be the favourite of many speedcubers. He has a "Tip of the Week" series, solve and review videos. Unfortunately the channel became inactive 4 years ago.

Subscribers: 80K
Cyotheking is a professional speedcuber from Minnesota who will help you become faster.

Subscribers: 100K
“Shawn, from speedcubereview.com” is another SCS sponsoree. He has 84K subscribers, and makes unboxings, modding videos, reviews of not just cubes, but also cubing apps, a few tips and tricks videos and obviously reviews of the best cube brands.

Subscribers: 65K
A recent addition to the SCS line of sponsorees, Cube Solve Hero, or CSH, is best known for his unboxings. He is quite a slow solver compared to many other YouCubers, averaging about 30 seconds. One of his distinguishing features is his slick and seamless editing, which allows him to make jump cuts that look as though he has pulled cubes out of one another. He recently passed 50K subscribers, but, like Cubing Encoded, has been having a creative block recently.

Subscribers: 12K
Based on subscriber count this British youtuber (based on his accent) is far behind others on this list but his channel would deserve a bigger audience. The research he puts in his videos is remarkable. One of my personal favorites.

Subscribers: 30K
This active channel contains many puzzle reviews and is mainly dedicated to cubers who want to get sub 20 who at the moment are around 40 seconds using the CFOP speedcubing method.

Subscribers: 41K
This channel is mostly known for their music video parody, OLLCP: I'm R U R' U' and I know It. You can also find videos with cubing meetups, solves, QandA's, puzzle reviews

Subscribers: 310K
The official channel of Rubiks™ where you can see updates about championships and other official events and Rubik's™ brand-related topics, tutorials, how to guides etc.

Subscribers: 12K
Member of "Five Awesome Cubers" Chris Bird used to be an active YouTouber. His channel contains tutorials on how to solve the cube, reviews on puzzles so you know what to expect and what to buy.

Subscribers: 670K
Rob's World is more about origami than cubing but many of his cubing tutorials are really helpful and have received an impressive amount of views.

Subscribers: 250K
Daniel Brown's channel is about debating important political and social issues. It's not a cubing channel but he deserves an honorary place in this list because of his beginner Rubik's Cube tutorial has received 30 million views and it's among the first video cube tutuorials on the platform.