Update: this record was broken by Feliks Zemdegs >>

The new record was set on the Jawa Timur Open in Blitar Indonesia on November 6th using a Valk 3 cube named after himself and his own solution method, the Valk Last Slot. His average time was a remarkable 6.89 seconds which became a Netherlands National Record which is also the 3rd in the World currently, and he is only the 3rd person to ever obtain a sub-7 second average in competition.
The champion shared a video on his YouTube channel with the inspection, solution and a short celebration. Scroll down to watch it.
We are going to keep this post updated with the latest news as we find out more!

About the record holder

Mats Valk (20 years old) is a Dutch speedcuber who's best known for breaking the 3x3 single world record (5.55). He is also the former world record holder on the 4x4 cube single and average of 5 solves. Valk holds multiple Dutch and European records for World Cube Association-hosted events such as 2x2 cube, 4x4 cube, 5x5 cube, 3x3 cube one-handed, Square-1, 6x6 cube, 7x7 cube, and Skewb.
Mats announced on his Facebook page that his life turned upside down since the event. The solution video is trending number 5 on YouTube and is getting millions of views, it's on the front page of Reddit and he's getting media inquiries from all over the world such as the Daily Mail, Guardian, ZDF, Fox and many more.

Mats Valk used the Valk 3 speedcube to break the record, available on TheCubicle for $20. He personally endorsed and took part in the development of this puzzle. The cube has very thin high-quality vinyl stickers using the QiYi Half-Bright Color scheme vith vivid colors. 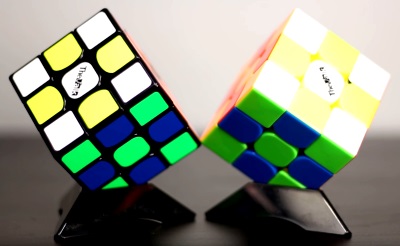 Mats announced on his Facebook fan page that he's going to upload a video but he has a bad wifi connection and he didn't bring a laptop to Indonesia. The video has finally arrived:

Mats used his own VLS method, (VLS stands for Valk Last Slot, a method which forces an OLL skip by inserting the last F2L pair with an algorithm). This is interesting as very few people have claim to this group (Rubik himself being one of the few), let alone setting a World Record with it.

Press the play button to start the animation: