Finger tricks - How To Get Faster At Cubing

Arguably the most important aspect of speedcubing, even after algorithm learning, is finger tricks. Should a person want to learn how to solve the Rubik’s Cube with no interest in speed, they will probably be using a Rubik’s brand cube or a cheap one from the Internet. These cubes were not designed to be solved at speed, therefore turning a layer requires a whole-handed grip on the layer and physically pushing or pulling it to its desired position. In contrast, if you were to watch a professional speedsolve at a competition or on a YouTube video, you will see that solvers simply use one finger to push the U layer across, or two fingers in one motion to do a double move (U2) on the top layer. You can also see them using their ring and pinky fingers to perform D moves without having to rotate the cube.

This is a skill that can only be mastered by practice. However, there are a few things that are necessities to anybody wanting to improve at finger tricks. 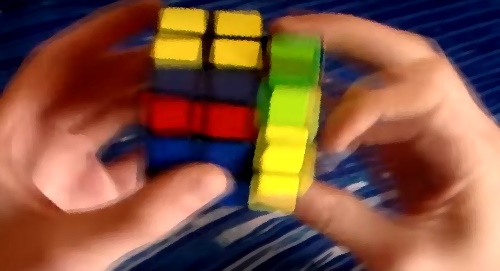 First things first: The cube you hold in your hands greatly determines your ability to speedcube with it. There is no cuber on the planet who can open a brand new Rubik’s brand 3x3 and instantly start fingertricking and speedsolving it. To anybody who has been solving the puzzle for a while and has either tried speedcubing or has frequented the Speedsolving forums, they should know that most speedcubers despise the Rubik’s brand. This is for a number of reasons, for example recently in Europe, Seven Towns (the company that owns Rubik’s) attempted to ban imports for resale on all non-Rubik’s branded 3x3 puzzles (they even instructed customs to destroy any puzzles of this nature). However, ignoring recent events, the main reason why throughout the past decade speedcubers haven’t gotten on well with Rubik’s is because of the quality of puzzles they create. Rubik’s creates its puzzles to appeal to the majority (i.e the 95% of the world population that cannot solve the puzzle), therefore there is no need for a puzzle which can be turned quickly. This has left many speedcubers turning to other brands, such as the Chinese companies Shengshou and MoYu (the speedcube section of YJ Toys). Despite the stereotype of Chinese products being poorly made, these are the puzzles that speedcubers rely on to be able to perform finger tricks and solve the cube as fast as possible.

This section should be fairly short, as it is simply an introduction to how speedcubers turn each layer in the most effective way.

U moves ­– To perform U moves, use the index finger of both hands to push the top layer in the direction you want (left finger for U’, right finger for U), whilst keeping all other fingers off of the top layer.

L moves – To perform L moves, do the same as above but inverted.

B moves – There’s no easy way around these moves; most speedcubers just rotate the puzzle so that the B face is now on top and just turn it as if it were the U face. Thankfully, B moves are rare in speedsolves and will only come up if they are a part of an algorithm you’ve learn. 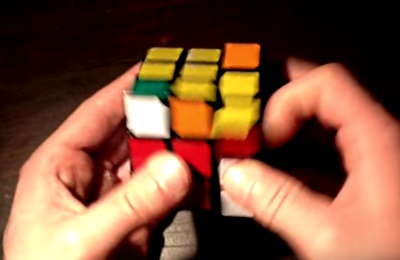 D moves – These moves will take the longest time to master. Simply hold the cube from the middle and top layers with your thumb and first two fingers, leaving your ring and pinky finger hovering behind the puzzle. Next, use either of you ring fingers to push the layer in the required direction. Same as before, although much more frequent than B moves, D moves are still fairly infrequent in comparison to the main moves R, L and U.

That’s it! These will take a while to master, and the best way to practice them is by trying to follow a scramble as fast as possible so you can switch between the positions quickly. These exact finger tricks are also used on larger puzzles such as the 4x4, 5x5 etc. but you will have to try and adapt them on a larger scale.

Finger tricks on other WCA puzzles

Not all puzzles turn like NxNxN puzzles. Some puzzle can be turned fast, but need different fingertricks to do so. Some should be fairly intuitive, for example the Megaminx, however others like the Skewb or Pyraminx puzzles need a bit more practice.