Over the lifetime of the Rubik’s Cube, there have been uncountable variants of the original 3x3 puzzle and even more of larger puzzles. Many different versions of 3x3 puzzles include sticker modifications (keeping the same 3x3 puzzle, but modifying the shapes/sizes/designs of the puzzle’s stickers to create interesting new puzzles with different challenges), shape modifications (cuboids made from 3x3s, mirror blocks that require the knowledge of shape rather than colour to be solved), and even some shape-shifting puzzles that can be turned in more ways than normal depending on how the layers are aligned, one type of which is known as the Ghost Cube. 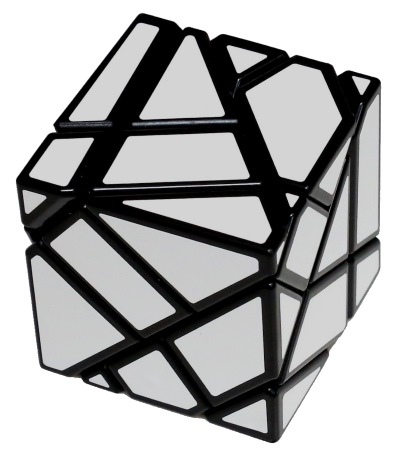 Ghost Cubes are, in their simplest form, puzzle modification. They are very unique types of puzzles that have properties that amplify the difficulty of the cube that they resemble – The solved state is not achieved once all the colours match, but rather once the cube matches its description – a cube. This means that a scrambled Ghost Cube can look rather daunting, just as any shape-shifting puzzle might.

The puzzle was invented by puzzle designer Adam G Cowan in 2008. The puzzle was invented with one goal in mind – “A 3x3 shape modification that is as challenging as possible while only allowing one solution”.  The puzzle had an initial market in early 2009, however the Ghost Cube remained simply a concept cube until puzzle designers took to amplifying the difficulty further – Larger Ghost Cubes were made (as though the original wasn’t difficult enough), and eventually even a 7x7 Ghost Cube was designed (pictured below). The puzzle was inspired by the well-known Golden Cube, produced by Tony Fisher. The Golden Cube uses a Skewb mechanism, whereas this puzzle uses a standard 3x3 mechanism. The puzzle is now available after mass-production by Mèffert’s Puzzles.

Unlike puzzles with similar solved states such as the Mirror Blocks (a significantly easier puzzle), the Ghost Cube has several different shaped pieces, making the “centre” pieces less obvious to begin with. As an added challenge, if all layers of the cube are aligned in a certain way, another turn becomes possible – straight through the middle of the aligned layers. This alignment makes some moves impossible until a setup move is performed, and even finding this setup combination that won’t ruin your progress proves incredibly difficult.

A good way to practice fixing centre orientation is by using a Super Cube (or Shepherd's Cube). This is a puzzle with an arrow on each sticker of the puzzle. A solved face will have all colours matching and all arrows pointing in the same direction. This will help you to understand the concept of solving centres as well as the rest of a puzzle.

The Ghost Cube can be solved in a similar way to the 3x3 beginner’s layer-by-layer method. In fact, if you know how to solve a regular Rubik’s Cube and have some knowledge of shape-shifting puzzles, you may be able to complete this puzzle unaided, although be aware that there is a parity case for this puzzle.

Check out the best online puzzle stores if you’d like to get your hands on one of these frustratingly difficult modifications and see if you can conquer the Ghost Cube.