The Mirror Cube aka Mirror Blocks

Many different types of Rubik’s Cube exist. Cuboids, different shaped puzzles (such as the Megaminx and Pyraminx puzzles), NxN cubes and more. But one thing that these puzzles all have in common is that their solved state is reached once each side consists of one uniform colour. Beneath the stickers, the Rubik’s Cube is just a black plastic lump with 3 layers and 3 rows. But there are some puzzles which have very different properties, puzzles which can only be solved when they are in the state that the normal Rubik’s Cube never deviates from – a cube. The Mirror Blocks is probably the best entry level puzzle in this field, as it requires knowledge of a normal 3x3 and its solution methods, but not as much as the more advanced shape-shifting puzzles such as the Ghost Cube or the Curvy Copter series. 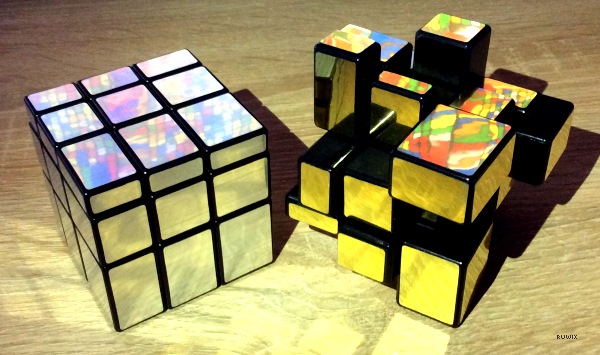 A solved and a scrambled Mirror Cube puzzle

The Mirror Blocks puzzle is, in essence, a fairly simple concept – A cube shaped puzzle that, instead of different colours on each side, has different shaped pieces and usually silver, reflective stickers that are all the same. No two movable pieces (excluding centres) share the same shape, but even those have different heights from the core. The puzzle is solved once it has been returned to its cube state. However, like the original Rubik’s Cube, even the simplest looking puzzles can appear daunting. A scrambled Mirror Blocks puzzle looks incredibly difficult, although its only difference to a normal Rubik’s Cube is what you’re solving – shape instead of sticker. 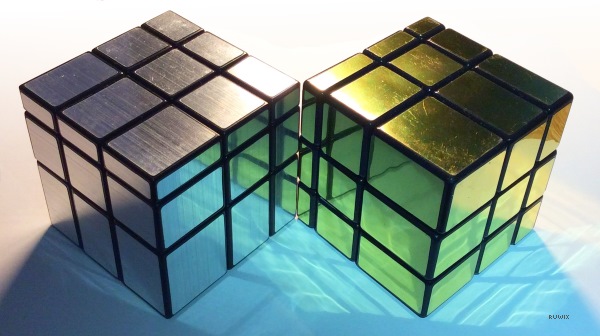 The silver and gold are the most popular sticker colours

The Mirror Blocks puzzle techniques are almost identical to the solution of a normal 3x3 cube, except you need to know what you’re looking for, and a lot of trial and error is involved. Solving the first layer can be done by matching edges to a centre with the same height. If an edge is above or below the centre it is next to, then it does not fit with that centre. The Cross you make should look like that of a normal 3x3 cube, except the common factor is the height of the pieces (which, if solved correctly, will all match the centre’s height). I prefer to solve the cross on the thinnest layer, so you know that you’re looking for small pieces when finding the cross edges.

The first layer corners involve similar trial and error – Inserting and removing corners until the first layer is solved. You can tell if you’ve done it right because one entire layer will look solved, with all pieces matching in height and shape. You will need to match the first layer you’ve solved with the centres on the second row however, but this is easily done by comparing heights, same as before. The middle edges are solved the same as on a 3x3 – Just insert edges that look correct one at a time, and if they fit, move on to the next.

The last layer is the same as always – Orientation then Permutation. Orienting the pieces will literally orient them. You will be able to see if you’ve correctly completed OLL because the top layer will be flat. Now you just have to permutate the last layer (PLL) as normal, but paying extra attention to the shapes as you go along.

As with many different types of puzzle, the Mirror Blocks cube has several variants, some more challenging and some more difficult. Currently in mass-production are the 2x2 (FangGe) and 3x3 (ShengShou) Mirror Blocks puzzles. Larger sizes including the 4x4 and 5x5 models have been theorised and in some cases actually 3D printed, but neither have made it into mass-production. 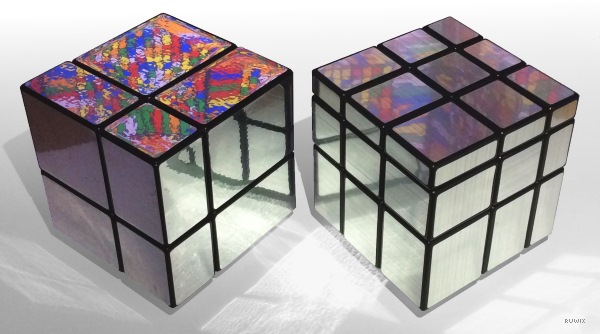 The 2x2x2 Pocket Cube version compared to a 3x3x3. 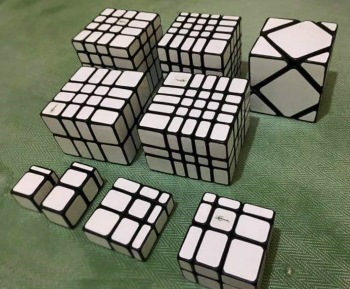 Some people enjoy speedsolving any puzzle, regardless of whether or not it was intended to be speedsolved. The most famous (and quite possibly, only) Mirror Blocks speedsolver goes by the YouTube pseudonym of TheSeppomania. Self-proclaimed “King of Mirror Blocks”, Seppomania holds several world records for several shape-shifting puzzles. This is not an official WCA competition event, however in 2016 the World Record single for a Mirror Blocks solve is 9.57 seconds, shown in the video below.