The Rubik’s UFO is an interesting puzzle that has similar properties to a Square-1. The puzzle was originally sold by Rubik’s however is now more difficult to find. There are two main version of the puzzle, one with black and green transparent faces and another with grey and lighter grey, although the grey version is rarer and often more expensive to buy.

The UFO can be solved using a step-by-step solution and only one algorithm plus the parity algorithm, making it fairly simple to solve for those with twisty puzzle experience and only slightly harder for those with none. 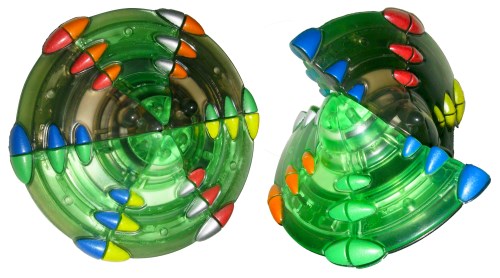 Although there is only one algorithm required to solve this puzzle without parity, the notation will still need to be covered for when it is required in intuitive section explanations.

The sections of the puzzle will be referred to as follows:

The puzzle has two “faces”, the top and bottom. These faces can slide across each other like any other puzzle. If you want to compare it to something, think of a 2x2 cube – The top and bottom faces can be moved independently of one another. On a 2x2, there are only 4 pieces on the top layer, so moving the top layer 90 degrees four times in the same direction will put you back where you started. The Rubik’s UFO works in a similar way, however there are six “slices” on each face. Performing six U moves on the Rubik’s UFO will return it to its original state. Below is shown what would happen upon performing a single U move on a Rubik’s UFO and how the six sectors on the top face would rotate.

U – A single rotation of the top face in the clockwise direction.

U’ – A single rotation of the top face in the counter-clockwise direction (the opposite of a U move).

U2 – Two rotations of the top face in the clockwise direction.

U4 – Four rotation of the top face in the clockwise direction.

The puzzle, in this orientation, can be turned vertically. This is the equivalent of an R move on an NxN cube and also a slash (/) move on a Square-1 (hence the similarity). 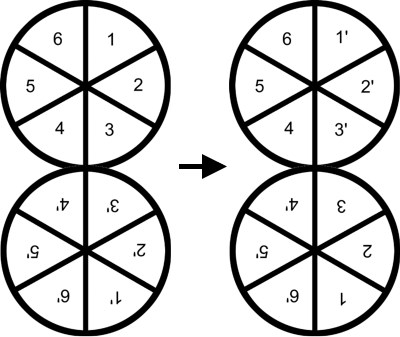 You also may need to rotate the entire puzzle by one sector if you have parity. The diagram shows what this rotation looks like.

y’ – A physical rotation of the puzzle which moves each sector counter-clockwise by 1 (on the diagram, image 1 à image 2).

y – A physical rotation of the puzzle which moves each sector clockwise by 1 (on the diagram, image 2 à image 1)

These are the only parts of notation that you need to know to understand how to solve the Rubik’s UFO.

Solving the first face and its ridges 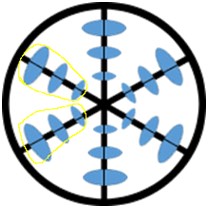 To solve the first face you need to first match three same-coloured sectors (green/black or grey/light grey) and ensure that the ridges also match. To make sure that these three matching sectors are correct, you should see the following:

If you’re having difficulty with the matching ridges, think of a 3x3’s cross pieces. If these two ridges don’t match, then the sectors do not belong next to each other (for example the red and green cross pieces were switched).

Once you have three correctly matched sectors, hold the puzzle so that they are in the bottom left of the puzzle (using the second diagram in the notation section, in positions 4’ 5’ and 6’). Finishing the bottom face should be fairly simple, as you can use a combination of / and U moves to match the remaining three sectors and place them on the bottom layer with the three you already have solved.

To solve three adjacent sectors, you must first match up two sectors. If two sectors are correctly matched up, there will be a solved ridge connecting them, so look for a solved ridge on the top layer. If there are none, don’t worry, just do the algorithm below from any angle once or twice to get a solved ridge.

The algorithm is as follows:

If performing this algorithm does not solve a second ridge, try it again. If this doesn’t work, try changing the position of the two sectors you already have solved (if they’re in positions 5 and 6, try putting them in positions 6 and 1), and try it again. Eventually, you should have two solved adjacent ridges and, therefore, three adjacent solved sectors.

It is at this point of the solve where any parity you may have becomes obvious. Move the three solved sectors you just joined together into positon 4, 5 and 6 (the 3 leftmost positions on the top face). You can now tell if you have parity by going through the following process:

If you do not have parity, then the last 3 sectors can simply be solved using the same algorithm as before. Make sure you put your three solved sectors in positions 5, 6 and 1 before you start to preserve them, and perform the algorithm until the puzzle is solved.

To solve the last three centres when you have parity, you need to apply an additional algorithm which swaps two adjacent sectors and ultimately solves the puzzle. 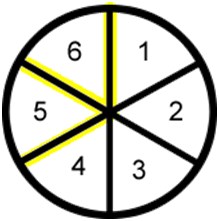 To get into the state ready to perform parity, you need to first ensure that you have four solved sectors. If you have only 3 solved sectors (the 3 you built in the first stage of the top layer) and you know you have parity from the above checks, position your three solved sectors in positions 5, 6 and 1 and perform the above algorithm until you have 3 adjacent ridges solved and 3 adjacent ridges unsolved (this proves that you have parity). Now look at your solved ridges. Place the ridges in positions 4-5, 5-6 and 6-1 (4-5 = there is a solved ridge between sector 2 and sector 3). Using the adjacent image, there should be a solved ridge in highlighted positions.

Next, perform the following algorithm which will swap sectors 2 and 3, completing the puzzle:

This algorithm is fairly lenghty, but it’s the easiest way of swapping 2 adjacent sectors without disturbing the already solved bottom layer.

After all of these steps and parity correction, your puzzle should be solved.