The 2x2x2 Rubik's Cube (also called as Pocket Cube or Mini Cube) is the two layered version of a Rubik's Cube. This puzzle was invented by Rubik Erno before the 80s and was patented on March 29, 1983. At first sight it may seem to be a simple puzzle but it's good to know that it has more than 3,6 million possible permutations so it's impossible to solve it by just randomly twisting the faces.

The 2x2 cube is an official WCA competition event, the fastest solves being below 2 seconds. 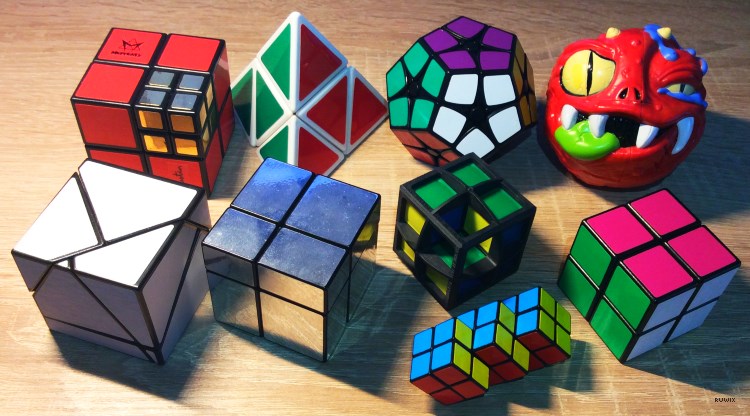 The 2x2x2 has inspired many designers and lots of variations and shape mods were produced since 1981 as seen on the picture above.

Starting from the top left a center-shifted 2 color Meffert's Pocket Cube by Justin Eplett which basically is a 2x2 in a 2x2. The Pyramorphix is not a 2x2 Pyraminx but in fact it's a smart mod where you have to worry about the orientation of only 4 pieces.  The Kilominx dodecahedron-shaped puzzle is the smaller brother of the Megaminx. On the right a member of the Mad Heads zombie series which proves that any shape can be built on the core of this cube. 2x2 puzzles are available in the shape of cartoon figures, the most common being the Homer Simpson head.

A Ghost Cube and a Mirror Cube in the second row which are probably the most popular shape mods of the NxNxN cubes. Next a non-twisty sliding puzzle, the Inside out 2x2x2 (or Vadász Kocka) which works like a 3D 15-Puzzle. A small Siamese (Triamese) puzzle where three cubes are sharing their corner pieces.

Try some pretty color patterns if you're tired of just simply solving the cube the traditional way. Try to reach the schemes on the images or invent new ones. Having only four stickers per face the possibilities are limited compared to the Rubik's Cube color patterns. Find the algorithms below if you get stuck.

How to solve the Pocket Cube?

The 2x2 cube is basically a Rubik's Cube without center and edge pieces having only the 8 corner pieces. If you can solve the classic 3x3x3 then you will be able to unjumble this one too.

You might meet two cases that you will never see on the 3x3x3: when two pieces are switched on the last layer.

Swap two pieces
next to each other: 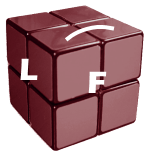 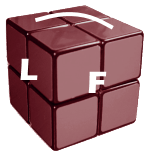 To handle this problem use one of the algorithms. If you don't know what the letters mean please read the Rubik's Cube notation.

In case you have never solved a Rubik's Cube before here's the easiest solution method for beginners.

An example algorithm: F R' U2 (turn the front face clockwise, then the right counterclockwise and do a 180° turn of the up face)

Start with the white face. This is the easy part so you can try to do this without using the algorithms.

Turn the cube with the white face down because we won't need to work with that anymore. Turn the upper layer to see how many pieces can be moved to their final position. The orientation doesn't matter at this stage.

At this point all pieces are on their final position, we just have to orient the yellow corners.

Hold the puzzle in your hands with an unsolved yellow piece in the FRU (front-right-up) position, then do the R' D' R D algorithm twice or four times until that specific piece is oriented well. Making U' moves bring another unsolved piece to the FRU spot and repeat R’ D’ R D until this specific piece is ok. In each step the algorithm needs to be performed twice to turn the corner counterclockwise and four times to turn it clockwise.

For a more detailed explanation of this step with animated examples read about the orientation of last layer corners here.

Congratulations, you have solved your 2x2 Cube!