The Rubik’s Cube is the one of the largest selling toys ever to be released, and despite being invented over 40 years ago, it remains as one of the best-selling and most popular toys of all time, on the same level as LEGO. However, due to its popularity, the Rubik’s Cube and its patents have encountered numerous issues over the years, especially within the speedcubing industry (where external companies have created Rubik’s Cube variants with the sole purpose of making them as fast and efficient as possible), and these issues have led to some pretty large scale legal battles, some even in recent times. Nowadays, the patents held by Seven Towns (the company that signed with Ideal Toys to bring the Rubik’s Cube to the rest of the world) have expired, so the imitations and improvements released by Chinese companies are now legal, but there have been several issues in the past when the patents were still valid. Here, we will take a look at some of the most notable patent issues that the Rubik’s Cube has encountered. 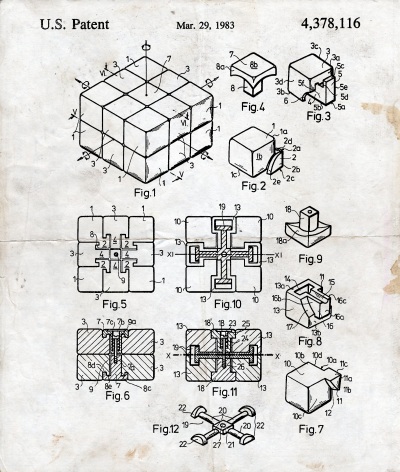 When the Rubik’s Cube was originally released, due to its worldwide popularity, the Ideal Toy Corporation released the Rubik’s Pocket Cube, a 2x2 variant of the original puzzle. However, Larry D. Nichols held the patent for a “2x2x2 Puzzle with Pieces Rotatable in Groups”, a 2x2 puzzle held together with magnets on each inner side. This led to Nichols assigning the patent to his employer who sued Ideal in 1982 over patent infringement against the original Rubik’s Cube. In 1984, Ideal lost the suit and appealed. After another two years in 1986, the courts decided that the Pocket Cube did indeed infringe on Nichols’ patent, but the original Rubik’s Cube did not. The ruling on the 3x3x3 cube was thus overturned.

V-Cube is one of the first companies that manufactured Rubik’s Cube style puzzles after the original Rubik’s patents expired in the year 2000. They started to sell cubes in 2008, although patents had been released to the public earlier. V-Cube has patented the method of creating large puzzles of 5x5x5 and above. They currently mass-produce puzzles from 2x2x2 up to 9x9x9, but they hold patents that include 11x11x11 models.

V-Cube is known as a controversial company for their legal action against other companies releasing similar puzzles. They prevented the Maru 4x4 from being sold in 2010, and even challenged the up-and-coming DaYan GuHong, insisting that it infringed their V-Cube 3 patent. Since then, both puzzles have been bought back and no further action has been taken by V-Cube against other puzzle producers.

In 2012 it was announced that Seven Towns, the parent company of the Rubik’s Cube brand, had started to go after DaYan for copyright infringement on their colour scheme. It was claimed that the layout of the stickers in the RWB clockwise configuration (Red, White and Blue) represented the Rubik’s copyright image and their product. The DaYan puzzle was considered a knock-off or counterfeit version of the Rubik’s Brand, regardless of its mechanical improvements for the purpose of speedsolving. It was even being reported that large orders of cubes were being seized and destroyed at customs. Thus, many companies started to remove assembled puzzles from their site and only sold DIY kits of the puzzles to prevent further issues. This story resurfaced in mid-2013 when several people complained of puzzles being destroyed by customs, however after this nothing new came out about the story. Since DaYan’s drop-off as the number 1 speedcube manufacturer in early 2014, there hasn’t been any update to this story. As part of the original suit, DaYan were required to switch to using Purple instead of Orange on their speedcubes, although this only happened for a very short time, and now commercially available DaYan products use Orange again.

Seven Towns, since 2006, had been trying to fight to copyright the shape of the Rubik’s Cube to further protect it from knock-off variants. The company originally registered the three-dimensional shape with the European Union Intellectual Property Office (EUIPO) in mid-1999. In 2006, German toy company Simba Toys challenged the trademark, claiming that the puzzle’s function should not be trademarked but simply patented. In 2016, after a 10-year legal battle, it was announced that Simba Toys had been successful in removing Rubik’s 3D cube trademark. The decision was said to be a big step against organisations seeking monopoly status over technical solutions. This ruling has also greatly benefited Chinese companies who produce modified puzzles designed for speed and allowed them to continue selling their products all over the world.