The windmill cube is a 3x3 shape-mod. The cube is a 3x3 cube, but cut diagonally on the white and yellow faces, rather than horizontally like the rest of the cube. It is what is known as a supercube, which means that center rotation matters. So, what that means is that if one of the red, green, blue, or orange (on a windmill cube) centers are rotated by 90° in either direction or 180°, that would not be considered solved. Other than that, the features that distinguish it from a 3x3 are that the sides only have six distinct pieces, which are the center, the two edges above and below it, and the edge and two corners to the side of one of the center rows. The other pieces are there, but are hidden. It is not a WCA official event, although some competitions may have it as an unofficial event. 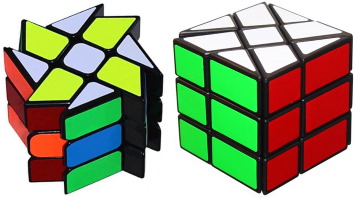 The notation is the same as the 3x3 cube. As it is not an official event, there are no scrambling requirements, but the general consensus is that you should scramble with the white (or the lightest color) face on top, and the green (or next lightest adjacent face to white) facing you.

The Basics of Solving It

The solving method is your 3x3 method, keeping in mind that some corner permutations are very hard to recognize. I find PLL on windmill cubes very hard. So, if you use the beginners 3x3 method, you would start with a white cross, then the white corners. Next, you would insert the second layer edges, then make the yellow cross, permute the corners, and orient them. If you use CFOP, then cross, F2L, OLL, PLL. If you use other methods, then just follow those steps. I don’t recommend using any methods where you have to recognize corner permutation a lot, like the Mehta method.

For this Guide, I will be using the beginners 3x3 method from this website. This is not the only method, as explained above, so feel free to use any other method. I am just using this one so that it is understandable by cubers of all levels, as they will most likely know this method. 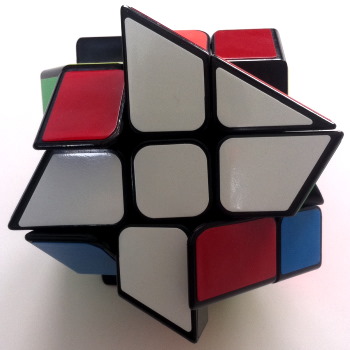 This step involves inserting all the corners to make the first layer complete. On the windmill cube, it is different to the 3x3, as the corners only have white and one other visible color on them. The other color is invisible, due to how the cube is cut. To check whether the corner has been inserted correctly, check whether the visible corner color and the edge that it matches are on a flat face (ignoring the bump caused by the center being badly oriented. 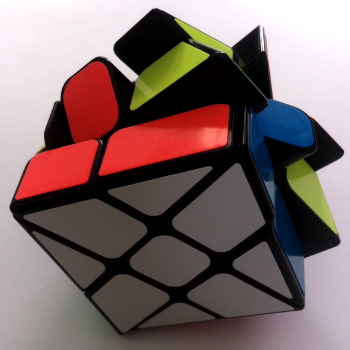 These are the two different edge cases. 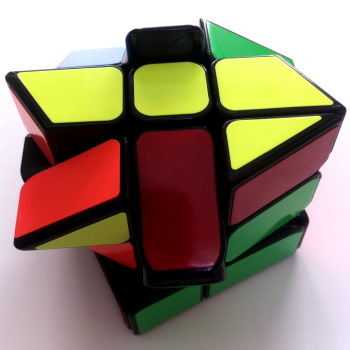 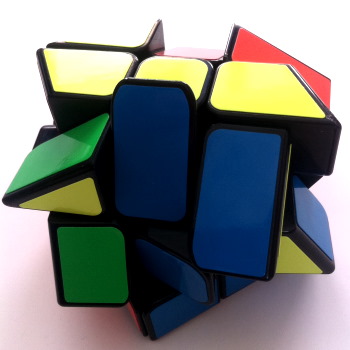 This is what the finished second layer should look like: 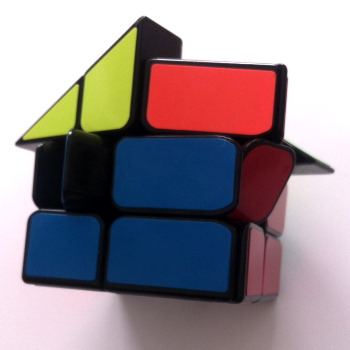 This step is identical to the step on 3x3. 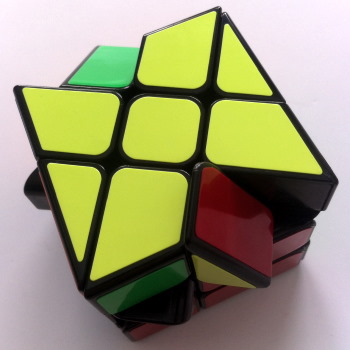 This step is also identical to 3x3. 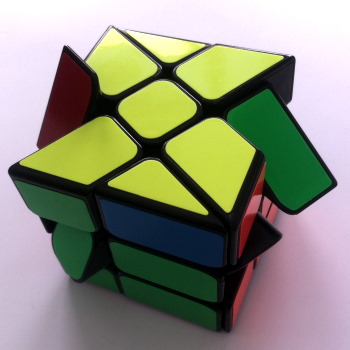 Again, identical to 3x3. The corner recognition is however made a bit harder by the fact that they only have one ‘visible’ color, but it is still pretty easy if you have some experience solving cubes, especially shape mods. When the edges are positioned where they should be, and the edge color matches the face it is above, the corner which shows that color must be placed to the right of that edge if you use white cross and to the left if you use yellow cross. 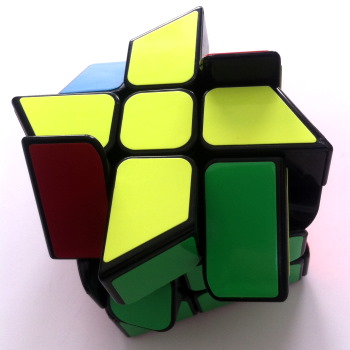 Orient the Yellow Corners to Finish The Cube

This step is again identical to the on on 3x3 cube; you just need to ensure while doing it that you don’t accidentally move one of the other faces. 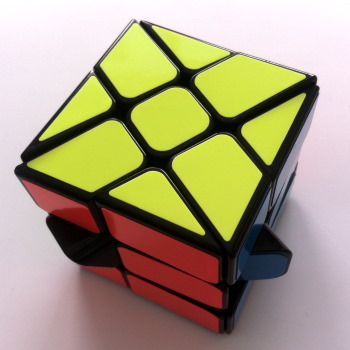 Since it is a supercube, as I mentioned above, center orientation matters just like on picture cubes. There are two algorithms, and by combining them, any of the 3 (actually 4 including the solved case) cases can be solved. The three cases are shown in the pictures below. 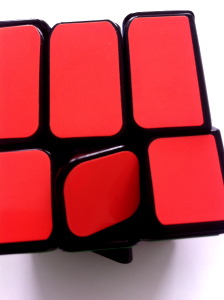 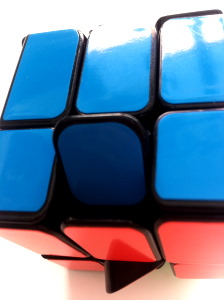 The red one shows one of the two center twisted 90° cases, and the blue one shows the 180° twist case. To solve, or turn into the blue case, the red case, or the other center twisted 90° case, you need to hold the white face on the right with the center needing to be twisted on the U face, which means that you will be holding the cube sort of diagonally, and do this algorithm:

or extrapolated out as:

If you want to cut off a few more seconds, you can execute as

I personally recommend the R U cycle.

Congratulations, you have solved the windmill cube!
Article by J8Cubes