This is not the largest anymore! Check out the 33x33x33 cube

A 22x22x22 Rubik's Cube became the world's highest order twisty puzzle, created by corenpuzzle. It was completed in mid-January 2016 and it contains 2691 functioning parts made with a consumer 3D printer. 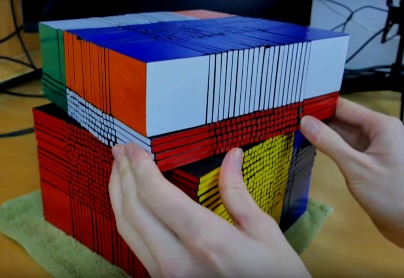 The record-breaking cube should have been completed at the end of November the previous year but unfortunately it fell apart twice.

We have to note that Tony Fisher has presented a 28x28x28 cube which turned out to be just a joke, being just a "simple" mass-produced 13x13x13. However this one is fully functional.

Due to its hard turning it takes 3 hours to make a simple checkerboard pattern, an action that requires 3 middle layer turns on the classic 3x3 Rubik's Cube. It has a similar look and quality as Matt Bahner's Yottaminx, the highest order (15) dodecahedron-shaped Megaminx, having 2943 parts. 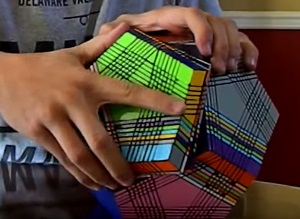 The 22x22x22 has got bigger edge and corner pieces to hold the small centers together, because on cubes any larger than a 6x6 normal-sized corners would overhang during turns making it unable to attach them to the core. making one side larger than a 3x3, a 4x4 and a 5x5 combined. The mechanism is based on Oskar van Deventer's floating anchors. 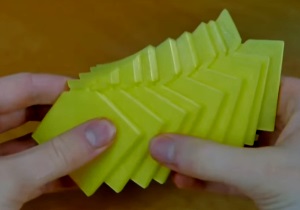 Working on such a project is about pushing the boundaries of custom puzzle building on a relatively small budget without using the expensive technology of injection moulding.
We hope we'll see more projects like this in the future.