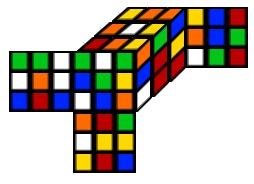 You can use the following settings to adjust the scramble:

Scrambles: Set how many scrambles you want to generate. This number may vary from 1 to 99 and it must be a valid integer.

Length: Set the length of one scramble. This must be a number between 0 and 999. To see how the unscrambled puzzle looks, set this number to 0.

Separate: Activating this checkbox the program will insert separators into the algorithm after every five rotation for a better readability.

Orient: On official competitions the white face is on top and the green face is on the front of the Rubik's Cube by default. Check this box if you need a random initial orientation to be applied.

FRU only: ie Front-Right-Up only. Set this if you want to use only these rotations to scramble the Rubik's Cube.

The Notation of the Rubik's Cube

To understand what the letters mean in the scramble you must familiarize yourself with the FRUBLD Notation of the Rubik's Cube.

Each face of the Rubik's Cube is marked with a capital letter: 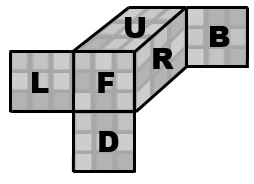 A letter by itself means a clockwise rotation of a face, while the letter followed by an apostrophe (') means a counterclockwise turn.