Solving the Rubik's Cube with Feet

There are many types of events on Rubik's Cube competitions, such as the one-handed, fewest move count, blindfolded and others that make the solution even more challenging.
A commonly debated event, the 3x3x3 with Feet is an event where the competitor has to solve the Rubik’s Cube with their lower extremity of the leg below the ankle, on which a person stands or walks. Recently, the World Cube Association (WCA) has changed the regulations so that competitors can inspect the cube using their hands, and then start, solve and stop the timer with their feet.

To effectively solve a 3x3 this way, a method that is economic like Petrus would be recommended to keep the amount of turns of the cube to a minimum.

The Feet event is highly disliked due to some competitors opinions being that it is an unsanitary event. Some positive outcomes for removing this event would be easier and better organisation for competitions, as when there are feet events held it requires floor space, making it easier for organisers in larger competitions. Additional equipment such as plastic gloves, and additional timers could also be needed to host such event. However, most professional solvers do wash their feet before handling the puzzle. 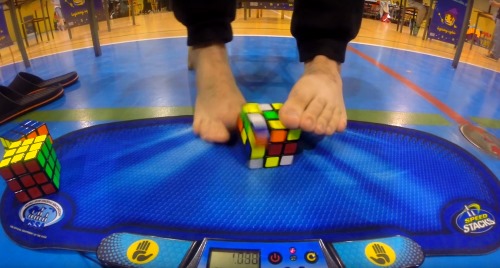 The removal of this event would also result in the Sum of Ranks, which is a common way of measuring the overall rankings of top competitors, being more reliable as some top speedcubers refuse to do feet due to personal reasons.

However, the negative with removing this event would make all the current records for feet unofficial, and would no longer allow future official solves. There are many passionate feet solvers and that would disappoint a major amount of people within the cubing community.

Also, solving the Rubik’s Cube with feet to non-cubers and outside media is really impressive, which can leave a good impression to outside media such as news channels who report on events that are happening in the area.

A common argument for the feet event is to change the current format, which is a Mean of 3 (competitor does three solves, and mean is calculated from the 3 solve times), to Average of 5, where the competitor does 5 solves, the best and worst solve are disregarded although recorded, and the three middle solves are taken into an average. In a positive light, this would give players the chance to have more solves, therefore being able to get a slightly better time, but if this were to be changed each solve would take longer to prepare and judge.


Video of the 20.57 seconds solution of Jakub Kipa

Current world record holder broke the world record twice, with the first solve being 25.04s and the second one being 20.57s.