Fewest Move Count (FMC) is an official WCA event that provides a bit of a break from normal speedcubing for those attending competitions. For some, this event is the sole purpose of attending. While most competitive speedcubers aren’t too bothered about being incredibly competitive and skilled at this event, there are some solvers who spend weeks, months, even years perfecting their techniques to try and solve the cube as efficiently as possible. This event is, however, much less impressive to the average person; they want to see incredible fingertricks and below 10 second times, and aren’t really concerned that you spent an hour finding the fastest solution to a random scramble. This shouldn’t put you off though, as it is definitely a rewarding experience and gives you reason to increase your knowledge of what certain algorithms and combinations of moves can do to the cube.

First, I’ll run through how an FMC solve would happen at an official WCA competition, start to finish. Then I’ll talk briefly about some of the methods and techniques that solvers use, and then finish by giving some suggestions on how to improve. We have already discussed that every possibble Rubik&rsquo;s scramble can be solved in 20 steps or less, let's see how many steps do we need! 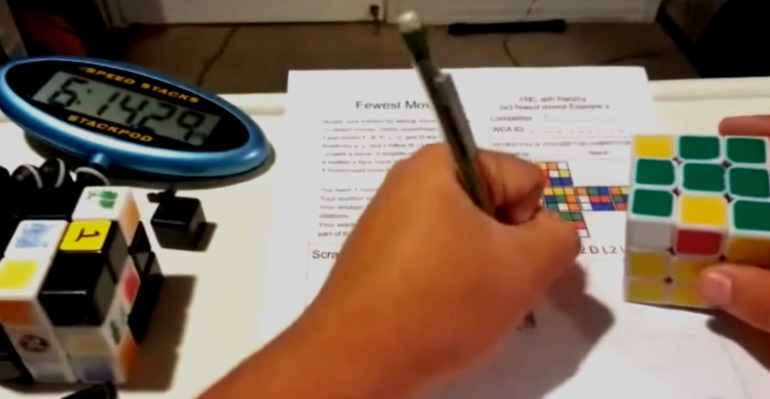 A standard FMC solve in competition

In preparation for the solve, you should take a few things to the solving area – A pen, 3 Rubik’s Cubes, coloured dot stickers (sometimes provided by the delegates) and an approved stopwatch to keep track of time. You are allowed to just use one, two or three cubes, but multiple are useful for leaving in positions with multiple solutions that you want to test or potential paths. You will be provided with a sheet of paper which has a scramble (in standard puzzle notation, making it the only event where you must be familiar with this notation), a net of a cube with the scramble performed to show you what you should get when you apply the scramble to your own cube, some information about some of the more difficult notation such as rotations and a space for you to write your finished solution.

It is important to note that rotations you perform are counted as moves. Also, some moves that you can perform in a speedsolve that you may consider to be just one move, such as wide turns and slice moves, are counted as two and three moves respectively (for a wide turn, the two moves would consist of one move of the layer not included in the slice and a rotation to match the orientation a slice move would leave you with, and for a slice turn the three moves would be the left and right layers in the same direction and one move to correctly orient the puzzle). These moves cannot be written in your final solution as this will lead to a DNF (Did Not Finish) result, so try to avoid algorithms with moves like these.

Once you and all other solvers are ready, the timer will be started (at which point you can start your own stopwatch) and you will have 60 minutes to find the solution which requires the fewest moves that you can find. When there are 5 minutes remaining, you will be notified by the judge. Once you have finished, you must write your solution on the original sheet of paper along with your name and WCA ID. Notes you have made may also be collected in the event of an issue with your solution or a possible record. In this 60 minutes you should check your solution thoroughly, as even one incorrect move or any solution that does not solve the puzzle will leave you with a DNF and a wasted hour. You are allowed a maximum of 80 moves in your solution, including rotations. You are not allowed to simply reverse the scramble, and in a similar way none of your solution must be derived from the original scramble (for example, you perform the scramble backwards for the first 5 moves and then take a different method to finish).

Some methods that solvers use

There are no set methods to solving the puzzle efficiently every time. Different methods and techniques available don’t apply to every scramble at every step within the solve, such as block-building techniques. A large part of this event is trial and error, trying things and keeping track of the ones that work. However, the go-to method for solvers who aren’t too concerned about the result but would rather just attempt the event is the most efficient CFOP solve they can perform. Whilst in a normal speedsolve, a solver would focus on just solving the cube and maybe less so on the efficiency of their solve (the only real part that requires efficiency is algorithm memorisation and execution), in a Fewest Moves solve, time is not as big of a factor as it is in a normal solve. You are not judged on your time, but your solution. This leads to all kinds of different methods being performed in these solves. Most solvers use one colour to build their cross in a CFOP solve, but in FMC they may choose a different colour if it offers a better solution. They’d then try several different F2L paths, taking into account the resulting OLL case. Most speedcubers only know one algorithm for each OLL and PLL (maybe 2 algorithms for some easier PLLs), so F2L is an important stage. If the sacrifice of a few moves can result in very short algorithms or even skips for OLL and PLL, they may be more efficient. The average CFOP speedsolve is 60 moves, so given an hour this method can produce some staggeringly low move counts.

Tips and Advice for FMC

There are a few things that I’ve picked up from my own attempts at FMC and things I’ve seen being discussed and/or used by some solvers that can really benefit your attempts:

Using the Kociemba algorithm computer programs are able to solve the cube in 20 steps:
Start the Optimal Rubik's Cube Solver >>

If you can think of anything else, please leave it in the comments for others to see.