People are always looking for new and exciting ways to make solving a normal 3x3 cube more interesting. Some of the most popular techniques, currently implemented by the WCA as official events, involve solving the cube one-handed, with feet, or blindfolded. However, for the purpose of impressing large audiences, more efficient skills have been developed. One of the most common of these is solving the Rubik’s Cube whilst juggling. This can be done in a variety of different ways, such as juggling two balls with one hand and solving a cube with the other, all the way to solving 3 individual Rubik’s cubes whilst juggling them. 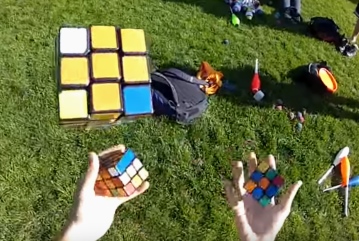 There are many people who have uploaded legitimate videos onto YouTube of them solving the cube whilst juggling, one of the earliest examples being David Calvo’s Three Cube Juggle in which he juggles two solved cubes with one hand, and solves a third with the other. The video dates back to late 2011 and since then has received 1,300,000 views. In 2012, David Calvo also appeared on Spanish TV show El Hormiguero where he solved 4 cubes underwater, which was the current Guinness World Record.

Another example of an amazing juggling feat was performed by well-known Rubik’s Cube solver and juggler Ravi Fernando. In 2013 he successfully solved three Rubik’s Cubes whilst juggling them. He solved the cubes one at a time but continued to juggle all three until they were all solved. The entire feat took him about 6 minutes, and was one of the first of its kind. There were, as expected, many comments from people who believed the video was faked all across the web, but solvers and speedsolvers alike backed Ravi’s solve and the video is now considered legitimate. Since 2013 this video has amassed nearly 1,500,000 views.

One of the most viral Rubik’s Cube juggling videos was posted in mid-March 2016. Juggler known as “RuboCubo” uploaded a video in which he was recorded performing the same task as Ravi’s video 3 years before, but this time in under 20 seconds. The media quickly grabbed a hold of the video and made articles on it, most saying that it was probably reversed.

The Telegraph, Sploid, Metro and Mirror all wrote about the topic, quoting reddit users from the reddit thread on the matter. Some puzzlers were quick to point out that the video was not real, and whilst the media and other sites were still unsure, both Reddit and the Speedsolving forums (who also had a thread on the video) began to try and discover how the video was faked. At first, many people were quick to point out that the video was reversed, however upon closer inspection and reversing the posted video, this was figured out to be incorrect. Others suggested that the solver had memorised a low move solution for each cube, but the difficulty of performing the moves in regards to the orientation of the puzzle when caught and the time he would’ve had to recall the move he had to perform from memory proved too large, and had it been the case it would’ve still been just as impressive. It was only when a user pointed out that the solver was standing behind a “Rushes” banner, a UK digital FX company, that the truth was uncovered. Approximately one week after the solve, the same YouTube channel uploaded a “How it was actually done” video proving that the whole thing was an amazingly well-done video edit. In the description of the video, it is written:

“The skill on display here is expertise in seamless digital effects work -- not physical solving of the Rubik's cubes.”

Regardless of the truth about the solve, the video was incredibly well done and the graphic effects shown helped to promote the company. The video was very highly regarded and received multiple comments from well-known faces within the puzzling community, such as YouTuber RedKB, puzzle designer Tony Fisher, and even the inventor of the juggling technique (Mills Mess), Steve Mills.