Since its debut in the early 80s, the Rubik’s Cube has been a staple of modern culture and creative thinking. It encourages principles of free-thinking, problem solving and an overall promotion of intelligence. These principles are reflected in not only modern art and creative ventures, but also the world of television and film, where the cube is represented as a simply display of intelligence to establish the abilities of a certain character in a way that nobody will misinterpret. 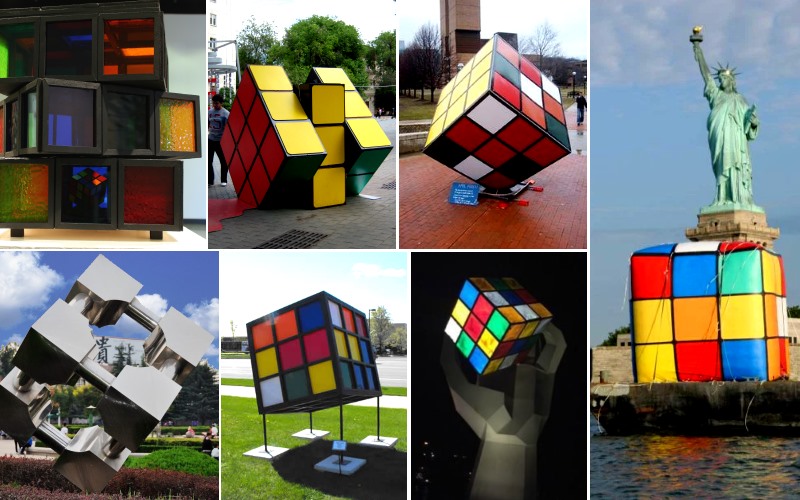 Over the years, the famous puzzle has been immortalized in history in many physical ways too. Not only have there been appearances in architecture, music videos, commercials but there have also been physical exhibitions and statues that commemorate the Rubik’s Cube. 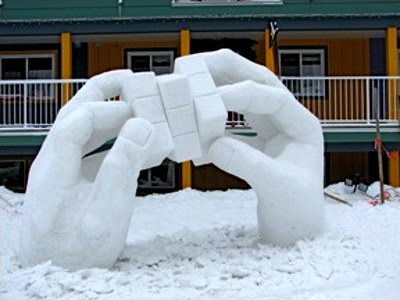 The award-winning creation of the snow carving competition on the 50th Vernon's Vinter Carnival (2010). The main difficulty of this creation was supporting the whole weight of the cube by some fingertips. The winner received a $1K cash and a well-deserved free trip to the Quebec Vinter Carnival to take part in the national snow sculpting contest.

The “Giant Cube” exhibition that forms a central part of the Beyond Rubik’s Cube worldwide-touring exhibition is one of the largest Rubik’s Cube statues in the world. Weighing in at 2,367 lbs, this cube can be manipulated just like a standard one, despite being 10ft tall.

This giant cube can be found at the Beyond Rubik’s Cube Exhibition that is touring the world for several years and will stop off in several locations worldwide.

Designed by Ernő Rubik himselft and created by Róbert Németh in 2010, the statue can be found in situated in the Gázgyári Lakótelep, Budapest, in the hometown of the inventor of the cube. Check out on Google Maps.

Students of the University of Michigan covered an original cube-shaped sculpture on the campus with coloured squares that resembled those of Rubik’s Cubes for an April Fool’s day prank in 2008. The students also created a giant Rubik’s Cube out of over 600 lbs of steel for the university’s north campus. The puzzle was much adored by the students who enjoyed its addition. It was removed later in the same semester, and reappeared for the first day of classes in autumn of the same year. The University once again removed the cube, but in response to the student’s disappointment, promised a permanent Rubik’s Cube installation in place of the one they removed.

After nearly a decade of waiting, the University finally completed the Rubik’s Cube sculpture. Weighing in at 1,500 lbs, this puzzle is also the largest hand-solvable Rubik’s Cube ever built.

There are several Rubik’s Cube statues created independently by artists and museums that either exist temporarily in public spaces or are permanent fixtures to commemorate the history and legacy of the Rubik’s Cube. These are found across the globe, so make sure to keep your eyes peeled when visiting museums in case there’s a cubic entry that you may otherwise miss!