Tony Fisher, British puzzle designer, the inventor of the Fisher Cube, the Golden Cube, the Tony's Pillowed Holey Skewb and many other custom twisty puzzle designs posted on his YouTube channel a video of himself forming the checkerboard pattern on a fully functional 1.56m (5.11 ft) wide cube.

We have to mention that this is not Tony's first big cube. He has got one with an edge of 30 cm.

As we can see on the video which he filmed in his patio he can barely move the heavy structure, weighing around 100kg, the stickers alone being 13kgs. Its volume is 20.000 times larger than the cube we've got used to and it took a month for the experienced inventor to build it.

The giant Rubik's Cube is fully functional and can be handled by one strong person. Probably a little lubrication would help 🙂

Tony Fisher tried to make the biggest cube he could but he had to take into account many factors, like the plastic he used and the huge Rubik's Cube had to fit in his house.

Tony broke the record of Thomas Linden, who created a giant cube with 1 meter wide edges.
There is however a slightly bigger cube made for the Beyond Rubik's Cube exhibition which can be turned by engines but this one's built on a skeleton structure and has not been finished with stickers like the classic cube puzzle. 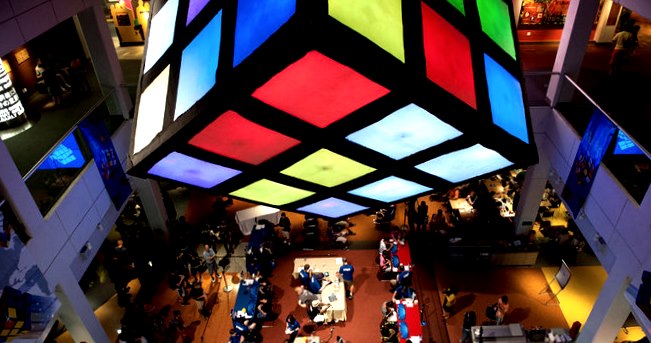 The biggest Rubik's Cube (skeleton) is displayed in the Liberty Science Center in New Jersey.

As we remember Tony has tricked us once last year when he presented the 28x28x28 biggest order NxNxN Rubik's Cube. As he revealed a couple days later, this was just a joke, being just a 13x13x13 cube with a specially designed sticker set.
This time Tony affirmed tha the Giant Rubik's Cube is not just a scam and we can expect more videos to come.