Over the last few months, Erno Rubik (the inventor of the Rubik’s Cube) has shown more and more interest in the world of speedcubing. Since the beginning of the hobby, Mr. Rubik has not been very active in the community or involved in the growth or development in the past, but now it appears that he would like to contribute in his own way to something that he believes will “promote education based on curiosity and emotional engagement”. 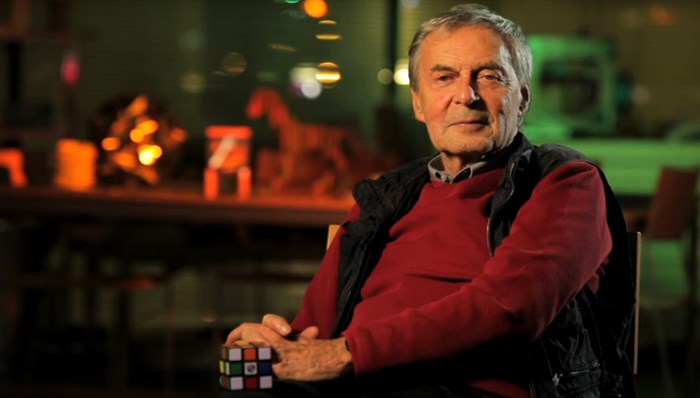 Erno Rubik made the first Google+ post talking about his new Rubik’s Speedsolving Initiative towards the end of December 2016. In this post he talked about his past collaboration with the Liberty Science Centre to create the Beyond Rubik’s Cube exhibition in 2014 to celebrate the 40th anniversary of the puzzle. He also made his interest in speedcubing publicly known and mentioned his desire to “celebrate the speedcubing community”. The first post was fairly vague, explaining how speedcubing is a rare hobby that is equally accessible for both genders and all races and backgrounds. He alluded to possible plans to take the Rubik’s Cube to the classroom, teaching students about this hobby to promote the inclusive atmosphere the community takes pride in. 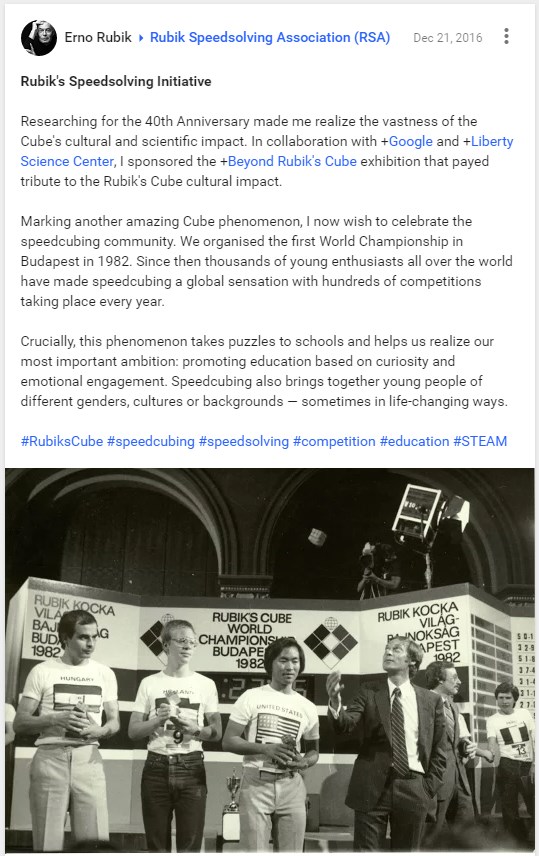 Rubik followed up the initial post soon after with the announcing of the launch of the Rubik Speedsolving Association, citing his desire for speedcubing to become “a true sport on a global scale”. He stated that the goals of the RSA would be to support speedcubers and competitions as well as bringing twisty puzzles into education. Using the power of Rubik’s corporate sponsorships, global media ties and the help of some of the world’s elite, Rubik hopes to bring attention to speedcubing and help promote it further than it has ever come close to before.

In the most recent blog post (as of March 2017), Rubik announced the current status of the RSA as “almost operational”, stating that the registration has been filed and it should soon be fully operational.

The RSA has, to date, strongly collaborated with the World Cube Association (the current organisation that manages speedcubing competitions and results) to organise the Rubik’s Cube World Championship 2017 in Paris. The RSA has secured sponsorships from Gan Cubes, the producer of the first mass-produced magnetic 3x3 puzzle and the designer of the puzzle used to break the current World Record. Other sponsorships are currently in the works, according to Rubik.

Rubik also stated in his blog posts that he wanted to be involved in speedcubing at bedrock level, helping to design record-breaking puzzles that are officially licensed by the Rubik’s Brand. Rubik invited Gan from Gan Cubes to join him with his efforts. Gan promises to “continue generating high-end speedcubes in the future, under both GAN and the Rubik’s brands”. Little is known about the progression of this initiative, as neither organisation has announced any new puzzles or developments since the initial collaboration.

By Ron van Burchem, the founder of World Cube Association.

Some of Rubik’s other blog posts regarding his involvement in speedcubing include his mention of the possible involvement of speedcubing in the 2024 Olympic Games, set to take place in Budapest, Hungary. This year will also be the 50th anniversary of the Rubik’s Cube, so there is a possibility of the Rubik’s Cube returning home for a World Championship event in the framework of the Olympic Games (this is also important as the current World Championships happen on odd years (2011, 2013, 2015 etc.), so a World Championship event in 2024 could perhaps be an off-schedule extra event).