The MS3-V1 is a brand-new cube made from a brand-new company to have just recently reached the market, with the company owner being a former GANCube designer. With many thoughts being spread around within the early stages of this companies success, some people believe we are beginning to see a new competitor to GAN, with their new cube the “MS3-V1” (“V1” suggesting they are going to make more versions) being a “Cheaper GAN option” to many. This is a closer look at the cube. 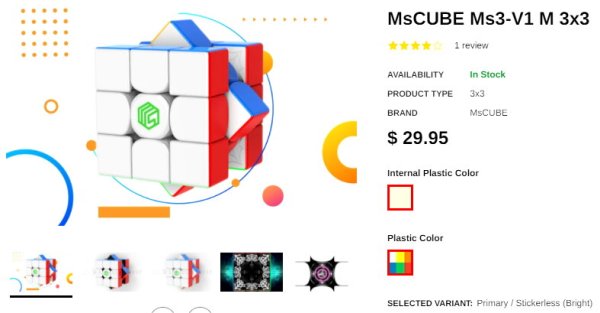 The two main version are the “Primary Standard” and “Primary Enhanced” the enhanced having the centre-to-edge magnets in place, whilst the standard maintains a light feel without these magnets. However, there are many more than just these two versions. Another 2 main versions would be the Black Internal Standard, and the Black Internal Enhanced. Although having not reached TheCubicle yet, those cubes will hopefully get stocked soon. There has been talk about 2 stickered versions, a Standard and Enhanced, however, this may not ever reach TheCubicle, although is confirmed. 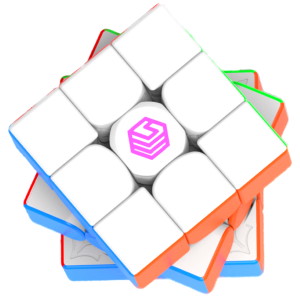 The main talking point of the MS3-V1 would be its resemblance to GAN, as well as their centre-to-edge magnets that they have in place in their “Enhanced” version. Centre-to-edge magnets have only been trialled in 2 other cubes before, the MGC Elite 2x2, and the Valk Elite 3x3, both of which having succeeded in some way. However, a con that seemed to have been noticed, was the difficulty of doing M Slices, moving the middle layer with finger tricks, due to the strength of the middle layer magnets being stronger than usual. Although this is the case, it appears MSCube have handled that with weaker centre-to-edge magnets which is great to hear.

The cube in general appears to be manufactured by a company that knows their plan. Their advertising seems to be very appealing with many images having the premium look to them along with their promotional video, also having that same premium feel to it compared to some companies that don’t create such promotional videos, in order to maximise how well the buyer knows their product. I think their advertising is great, and many people will look forward to what they have in store for their next release.

Overall, MSCube seem to be dominating the cubing news recently, due to their advertising, hardware and the cube which consists of a good “cobweb” design on the internals. This leads to a decrease in friction, whilst trapping and distributing the lubrication from within the cube at the same time. Whether they become a strong competitor in the future, we’ll have to wait and see.