As times have evolved, companies have started to move away from the standard Rubik’s Cube. Despite being over 40 years since its initial creation, the Magic Cube remains immensely popular due to its simplistic design. However, the puzzle remains a challenge to the large majority of the public, which can affect the sales as people just assume they won’t be able to do it or don’t want to take the time to learn. This has led to a reduction in sales, which has been combatted by Rubik’s through gifts and memorabilia. There are a few electronic puzzles and gadgets that have been released, and I’m going to list them here. 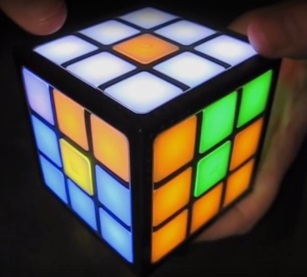 There are many different electronic Rubik’s Cubes that take puzzle solving to the next level. The Giiker Cube is the first smart cube that can be connected to a smart phone. The the Rubik’s Touch Cube, which is a fully functional Rubik’s Cube that uses pseudo-touchscreens to control movement on the puzzle and the Rubik's Spark which uses position sensors of the cube. However, younger puzzlers might enjoy the Futuro Cube which has a very simplistic design with both touch and motion sensors inside.

The first smart cube in the World that can be connected to a smartphone through bluetooth and an application. That orange "headset" is the charger of the puzzle. It it moves very smooth and the application can track its current position. We can play various games, such as bringing the cube to a given pattern, or we can use the application for a timer that automatically stops the counter as the cube reaches the solved position. 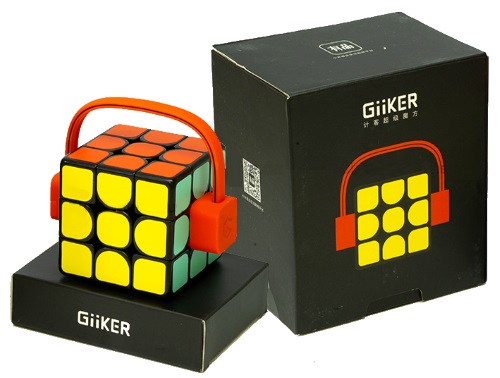 There are several games that come pre-installed on the puzzle and you can install more using the Futuro Cube program on your computer and even create your own games. Different movements of the cube control different actions, such as holding the cube in your hand and moving your arm in a circle three times will return to the menu. If you know somebody else who has the puzzle, there are a few multiplayer games that you can play when two cubes are connected. The gadget also has a speaker which explains games, and although the puzzle can be quite confusing to start off with in regards to the controls, once you get the hang of it it’s a great toy which doesn’t require knowledge of how to solve the cube, so it’s perfect for everyone. 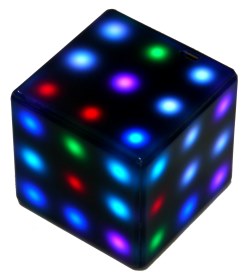 It was presented in 2016 opening a new dimension of game cotrol having no buttons and no touch screen, only motion sensors detecting the orientation of the puzzle as you tilt it. The toy has 6 built-in games with 25 levels that improve memory, speed, logic and dexterity. The six games are called Light The Cube, Seek And Destroy, Follow The Path, Tilt 'N' Zap, Snackin' Snake and Rubik's DJ. 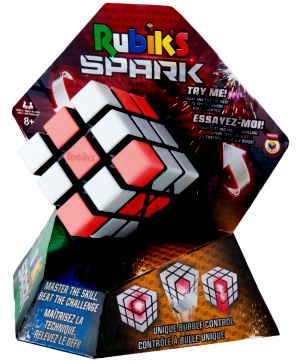 The idea of the Rubik's Spark is having an imaginary bubble piece blinking which always moves upwards as you rotate the cube. This way you can move the bubble around to collect checkpoints as fast as you can.

Another great electric game example is the Rubik’s Slide which hasn't got a cube shape but we still have to mention it in our list. The player has to recreate some goal patterns on the built-in 3x3 LED grid in order to complete the challenge. 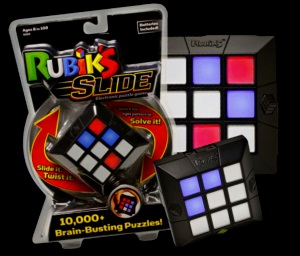 The Rubik’s Cube is an amazing puzzle that has entertained several generations. The majority of all Rubik’s Cubes are still simple plastic puzzles, but these electronic variations always provide a nice break from the difficult to turn originals, and help to keep the kids of today who are used to using iPads and computers from an early age entertained and to introduce them to arguably the best toy ever created.

Play with the online Rubik’s Cube 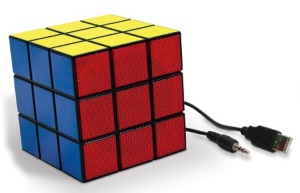 Many people have tried to solve the cube, and many probably have old cubes packed away in boxes or other places, but very few remain on display or anywhere other than forgotten. The general life cycle of a cube is the purchase, the few hours total spent trying to solve it, then putting it in a drawer somewhere and forgetting it. The cube doesn’t serve any other purpose than being generally frustrating, whereas this lamp both functions as a normal Rubik’s Cube and provides light. It’s a reason to keep it on your desk and on display, so you can always remember the times when you first attempted the puzzle.

Another great gift idea is the Rubik’s LED Soundcube Speaker which can be connected by Bluetooth or by 3.5mm aux-in. The speaker has 35 LEDs which flash to the beat of your music. It is fairly small (7cm x 7cm x 7cm), but the speakers inside are very powerful.

There are a few other handy gadgets such as a Rubik’s Cube themed USB flash drive and a Power Bank to charge your phone or tablet.