The Rubik’s Cube in Art 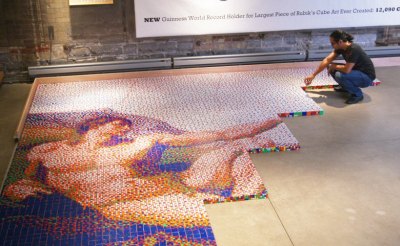 The juxtaposition between the simplicity of the Rubik’s Cube’s design and colours and the perceived difficulty of the challenge it provides makes it a good tool for artistic design and creation. There are many Rubik’s Cube related art pieces and paintings that are symbolic and make you think.

The most popular form of Rubik’s Cube art is the building of mosaics. Depending on the number of cubes used, these mosaics can range in size from ceiling-high to giant murals that use thousands of puzzles. The cube is used in many other ways and in many other art pieces also, which will be shown and explained below.

We have collected the most amazing examples of the Rubik's Cube pixel art mosaics with an image gallery and instructions on how to build yours. Although mosaics are undoubtedly the most popular art pieces created using Rubik’s Cubes, many other artistic designs that either feature the Rubik’s Cube or use the cube in the foreground. There are many different examples of perspective art, street art, tattoos, t-shirt designs, statues and even nail art that depict Rubik’s Cubes. 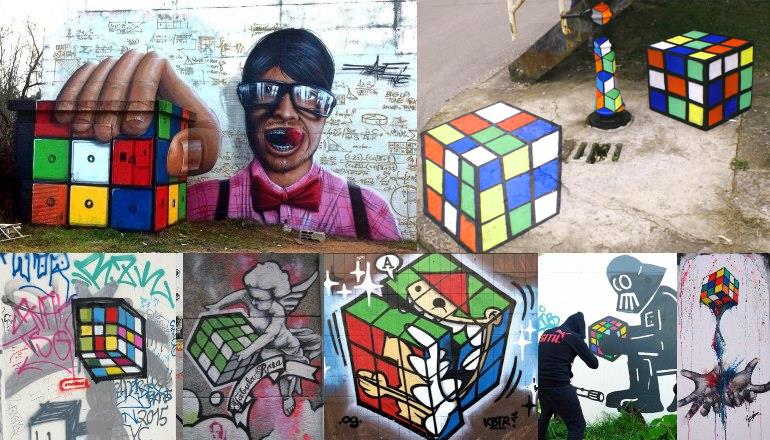 Street Art and perspective drawings have always been popular art forms, as they require immense talent and they are out of the ordinary. They have a little bit more significance in some ways than museum art, as these grand murals and colourful sketches are not expected, dotted around cities in full view instead of holed up within museum walls. There’s also no barriers or frames; just something else that makes these art pieces feel like true parts of a city. 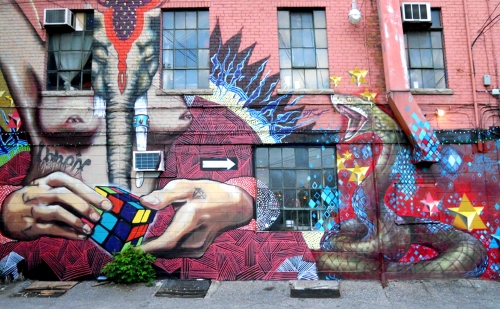 A spectacular graffity outside of the Green Room, Toronto 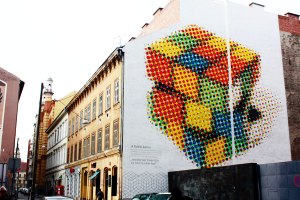 As part of a firewall rehabilitation program a Rubik’s Cube mural was applied on a wall within the Jewish Quarter in Budapest. These areas have witnessed horrible atrocities throughout history, but now they are being revived with colourful and intricate art pieces on large open walls by a young generation determined to pump the life back into the area. These modern and vibrant images bring life to urban areas, and what’s more colourful than a Rubik’s Cube? This 250 sqm painting was the 20th gigantic art piece by the Neopaint Group and it can be seen in Rumbach Sebestyén street, Budapest.

Another example of popular Rubik’s Cube art that is sometimes seen on the streets is perspective drawings. These drawings are made so that, when looked at from a specific angle, they look like realistic 3D objects. Famous street perspective drawings include large cavernous holes in the ground, or giant insects. These drawings can also be done by hand on a sheet of paper, positioning of the paper bringing the 3D effect.

Reat more about the Rubik's Cube in architecture! 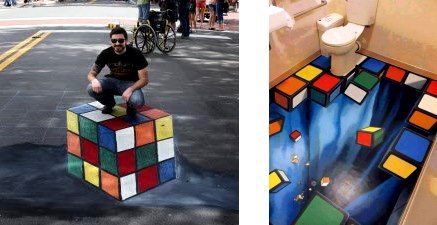 Some people believe that the Rubik’s Cube’s symbolism stretches much further than just a pastime from their childhood. As mentioned above, the puzzle can represent many things to many different people. Lots of people like to think of it as a way to define their uniqueness; the Cube has 43 quintillion different states, so no two tattoos will be the same (results may vary).

Here are some examples of ways that people have ingrained the famous puzzle on their skin to remain with them for a lifetime. 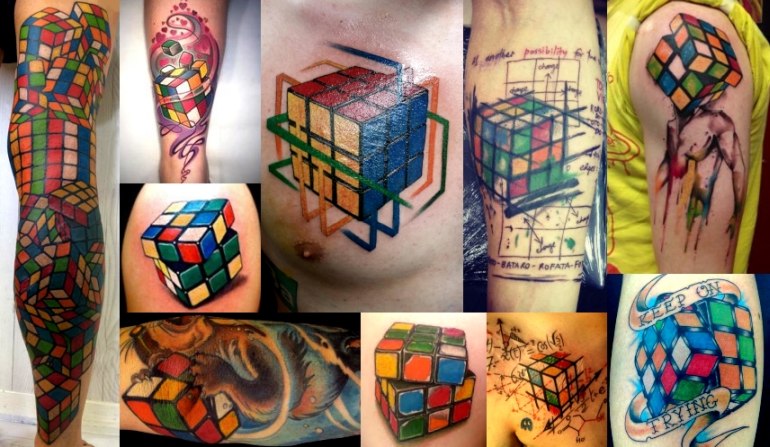 A simpler style of showing off your relation to the Rubik’s Cube without a permanent and expensive tattoo is a t-shirt which is also part of the popular culture. There are hundreds of different t-shirt designs available on different websites. Here are some of the most popular. Included here is the famous “melting cube” t-shirt worn by Sheldon Cooper, a character in the hit TV programme “The Big Bang Theory”. 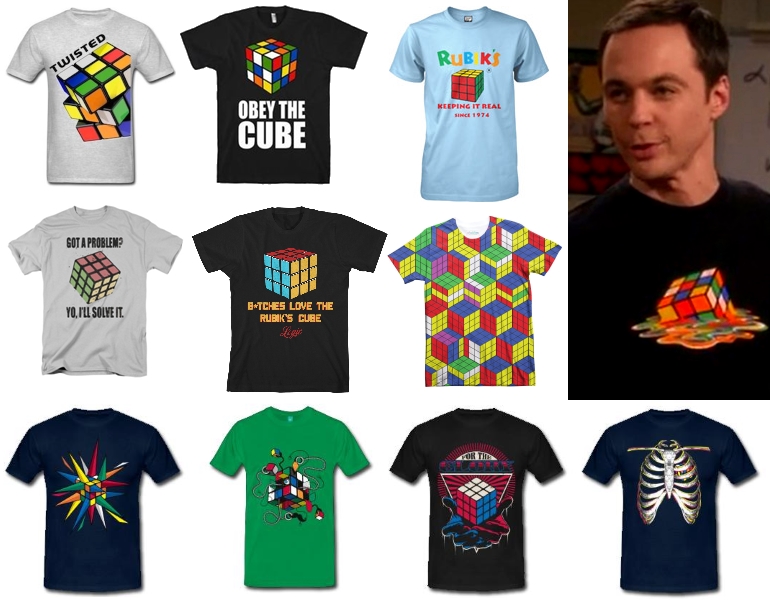 Other forms of Rubik's Art 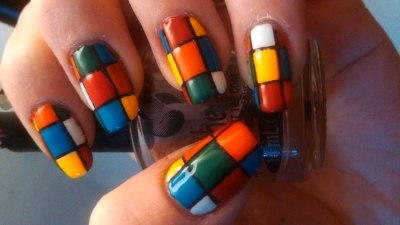 Nail paint art is another form of self-expression 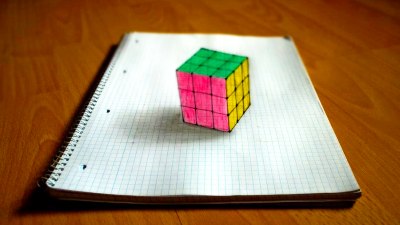 Seen or photographed from a specified angle, this perspective painting looks like a realistic 3D cube. 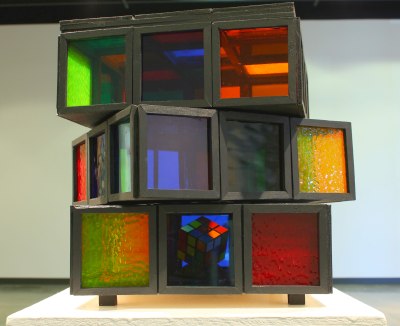 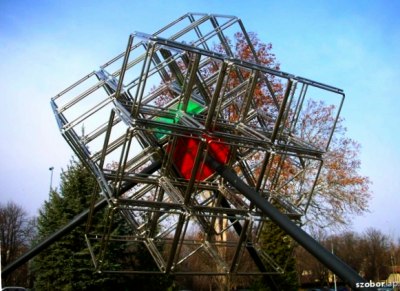 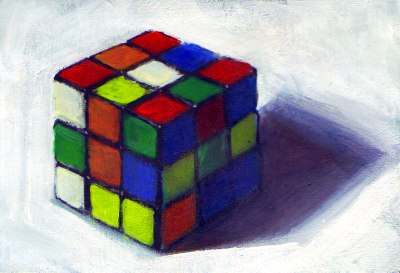 Painting of things on my desk by Chris Bancroft, 2007

Once you start you won't be able to depart.
We recognize it as a Puzzle
Initially you hustle and struggle,
And eventually when you involve and solve
You chuckle.
No wonder it's all about Coding and folding,
With your algorithms in the list,
cubes twist.

A Rubi'k Cube is a Race
With Six Face.
A Cube is so designed
That it has 26 cubes combined,
There are many tricks
Once you fix,
On your own
You get into the Cubing Zone.

A Cuber is a Player,
He knows it's solved in Layer.
Starting with a White Cross
Edges leading across.
Next, you solve Corner,
Thereby getting cubes in Order.
Later Fetch the Middle Edge,
Furthermore, you know how to Hedge!!
Lastly knowing the Notation
You lead to final Orientation.
Finally just as you get its way
It makes your day!

A Rubi'k Cube has 43 quintillion Possibilities,
Which you could figure out with your abilities.
A Cube is challenging
However, it’s all about practicing.
When colors displace in any case,
Get them all in the proper face.
Formally when you learn
To Turn,
You Master….thereafter!

In World Cube Association
It’s all about Concentration.
Where all the possibilities are explored
just to break the previous record.
It's your Addiction,
That you solve a Cube with full Conviction.
All colors in perfect point you provide,
Dear! It’s a Moment of Pride!

A Rubi'k Cube is with a Mission,
To get all cubies in ideal Position.
With a Mix of colors Six,
Applying various Tricks.
White Upright alongside blue
You knew, is between orange and red,
Beside yellow in the thread.
In case you have seen,
The last color is Green.
Consequently, you discover that
It’s a Toy full of Joy. So Enjoy!

Here I introduce you to Speedcubing,
Its learning process is time-Consuming,
Yet don's fear losing and keep Moving.
As there are about 200 Algorithm,
It demands a faster Rhythm.
For Example,
In the case of Scramble.
For a Cube Freak,
Lay on your Technique.
This method is Advance,
Moreover, your skills enhance.
Considering Hand and Eye in Co-Ordination,
You can win the World Cube Association.

With Cube popularity in Rise,
No Surprise!
It comes in various Sizes.
Standard (3x3x3) most demanded,
To add glory, next is cubing Floopy.
Following you wanna know, is Cube Domino.
Succeeding the hybrid mix,
Are Cube Megaminx and Pyraminx.
Downstream the element of fear,
Dear! its Cube Gear.
To Conclude,
The master of all Cubes is Skewb.