Rubik’s Cubes have shaped the way we think about problems in life, and have demonstrated that most problems and puzzles don’t always have the simplest solution, but they are always solvable. The original Rubik’s Cube received a lot of attention and fame in the 1980s, which led to a mass developed 4x4x4 being marketed under the names Master Cube and Rubik’s Revenge. This eventually led to the Rubik’s Professor 5x5x5 cube, but puzzle designers already had everything they needed to take the twisty puzzle world to a new level – Cuboids. 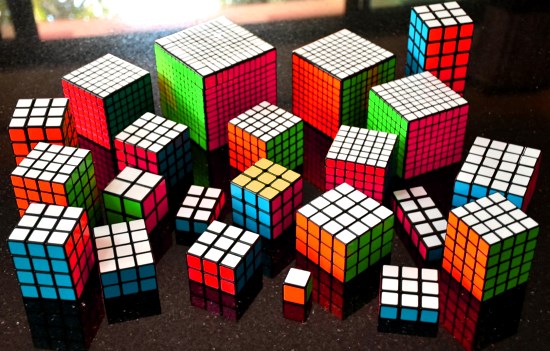 The world’s first fully functional cuboid transformation was Tony Fisher’s 3x3x4 puzzle, made from a Rubik’s Revenge. This was Tony Fisher’s first of currently 12 fully functional cuboid puzzles, however this one is the most ground-breaking due to its implications on the world of twisty puzzle design, including the methods used by Fisher to create the extra pieces needed to utilize a currently existing mechanism.

The majority of all cuboids are based on existing NxN mechanisms, and are fully functional (this means that each layer on each face functions as normal, and there are no restricted moves). There are several different types of cuboid design that all fall into one of the two categories:

There are also a number of different cuboid shapes and sizes, some of which have collective groups:

The largest cuboid ever to be produced is the Traiphum's 10x10x8. Most larger puzzles tend to have curved pieces that make the it not necessarily rectangular, but almost as if the insides were bulging outwards. This is a fairly common design, along with the strangely shaped pieces, for two reasons: