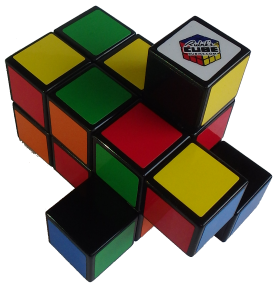 As you may have seen, many modifications of the original Rubik’s Cube exist. These can range anywhere from simple sticker modifications to complex shape-changing modifications, sometimes experimental. Cuboids are some of the most popular Rubik’s Cube modifications, taking on a form that completely warps the core concept of its inspiration – Removing the “cube” property. These cuboids can be made from some of the most difficult NxN puzzles (such as those used to create 8x10x10 custom made cuboids) to the simplest of them all (used to create small tower-like cuboids). Here we will take a look at a few of the easy cuboids, the 2x2xN series. 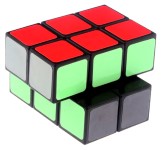 The 2x2x3, also known as the “Slim Tower”, was built for the first time sometime in the early 2000s. The invention date is unknown, although evidence has suggested that the puzzle was displayed at least once before January 2002. The puzzle was invented by Katsuhiko Okamoto, better known for his other modifications including the Latch Cube 3x3 modification, the Master Pyraminx (a higher order version of the standard Pyraminx puzzle) and, most popular of all, the Void Cube (now licensed by Rubik’s). The puzzle’s mass production began in 2009, and uses a 3x3x3 kernel as its mechanism.

The 2x2x4 was, surprisingly, invented much earlier than the 2x2x3 cube. The puzzle was made by Tony Fisher, using a standard 4x4 “Rubik’s Revenge” puzzle, in the late 1990s. It is unknown whether or not Fisher was the first to build this puzzle, although he is credited as the inventor by many sources. The 2x2x4 can technically shapeshift, although due to its small size any shapeshifting that is performed can be easily undone without external algorithmic support for most puzzlers.

The 2x2x5 is relatively recent in its line-up, with most of the larger and smaller variants being invented several years before. This puzzle was invented by Jesse Werner and was not presented until 2008. This cube was not mass produced until December 2016, when WitEden released its own mass produced version.

The original 2x2x6 was invented a full 6 years before its predecessor in the tower cube series. The first design used a standard 4x4 for its base, although this was heavily modified to create the new puzzle (in fact, for the first version, two 4x4s were used). The second 2x2x6 to be made was created by Tony Fisher, the first of its kind to use symmetrical pieces. This version was created in the years following the original release, which served as its inspiration. This puzzle has now been mass produced by WitEden, at the same time as the 2x2x5.

The 2x2x7 cuboid was invented as a follow-up to the 2x2x6 by Tony Fisher. Despite its functioning state, the movement of the puzzle was fairly poor, and has been kept as a one-off design from Fisher ever since.

Some designers have even gone as far as making 2x2x13 cuboids, but no higher than the 2x2x6 has been mass produced yet. 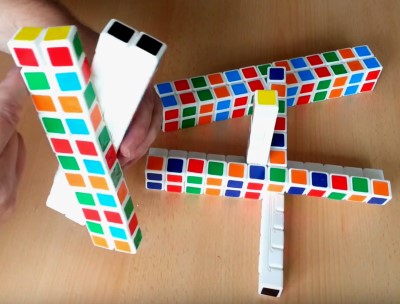 The 2x2x3 and 2x2x4 are the most common tower puzzles, so only these two will have their solutions explicitly explained. Most of the concepts of these cubes can be applied to larger 2x2xN puzzles, so once you can solve these two you should be able to solve them all.

For the 2x2x3 cuboid, you want to start by completing the opposing 2x2 faces (not the layers, just the faces). This can be done in a handful of moves if you have experience with twisty puzzles; solving one face will automatically solve the opposite. If you have 3 of the corners in their correct places, the final corner can be solved by positioning one corner above the other in the bottom-left position when looked at from the top down and performing the algorithm: U R2 U’ R2.

Next, you can permute the top and bottom layers separately by locating two solved adjacent corners (they should both have the same colour on one side), putting them on the left of the cube and performing the algorithm: R2 U R2 U’ R2 F2 U’ F2 U F2. If you don’t have two solved adjacent corners, do the algorithm from any angle to get two. After this step, the top and bottom layers should be solved.

The final step is to solve the middle layer. This is also very simple. If you have two matching adjacent pieces, move the middle layer until they match the top and the bottom layer. Hold the cube horizontally and perform the following algorithm to swap the two “top” pieces (remember that because the cube is now rotated, an R2 move will be made using one of the 2x2 faces you made earlier): R2 U2 R2 U2 R2 U2 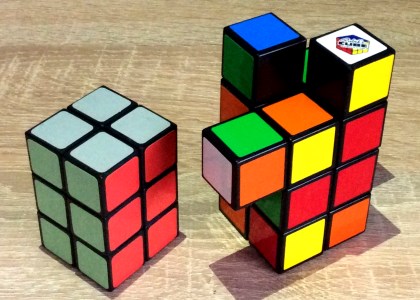 The solution to the 2x2x4 is slightly different to that of its predecessor. This cube can shape-shift slightly, although the shapeshifting will always leave 1x1x2 bars together. To undo the shape-shifting, simply solve a single layer of the bars and complete the last layer like a 2x2 cube (because some of the pieces are bandaged, the puzzle will function just like a 2x2, except instead of every 1x1 cubie, you will have 1x1x2 bars).

Once back into its cuboid shape, the puzzle is even simpler to solve. Simply construct four 1x1x2 bars of matching colours and orientation (similar to F2L pairs on a 3x3 cube) and move them all to the same layer. The top colour of the bars doesn’t matter (i.e. you don’t have to solve the first two layers, just create four bars). On the other side, simply perform U moves until you have two more 1x1x2 bars created (if you do a U move and only have one, do another U move until you have two made). If the two 1x1x2 bars you have made are adjacent to one another, simply place them on the left (in the same way as the top layer for the 2x2x3) and perform this algorithm (note that you should turn the bottom two layers when doing the D moves of this algorithm): U2 L2 D L2 y’ (rotate the puzzle so that the face that was on front is now on the right), D2 R2 D R2 U. If the two 1x1x2 bars are opposite one another, put them so one is in the front-right and the other is in the back-left, then do a U’ instead of the first U2 in the above algorithm.

Once your puzzle has 8 solved 1x1x2 bars, it’s simply an elongated 2x2. Just solve it like you would solve a 2x2 (same as the shape-shift undo moves), treating every 1x1x2 bar as the equivalent of a single cubie on a 2x2.